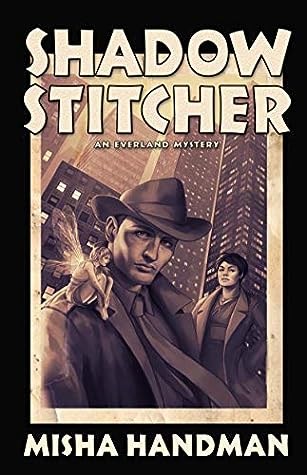 The mean streets and crumpled suits of crime noir intermingle with icons of a children’s classic, creating a detective tale where the endless joy isn’t completely gone but has become frayed and dirty.

Decades ago, the adult world reached Neverland. The glorious war between the pirates and the Lost Boys has been replaced by politics, business, and organised crime., and attempts to make childhood magic a commodity have only made it fade faster. Hook’s former first mate Basil Stark makes a living as a private detective. When a businessman hires him to find a missing paramour, he assumes it is just another tawdry tale of a man being conned by a pretty face; however, as he looks deeper he finds evidence of a remnant of the childish past acting with very adult intent.

Handman blends JM Barrie’s Peter Pan with pulp detective stories, producing a 1950’s US city where a new generation of Picadilly Indians live in their own enclave protected by treaty, fairy dust is cut with various substances to make a recreational drug, and the remaining inhabitants of Neverland from before civilisation arrived have started to age. Skilfully echoing the threads of darkness that lie within Barrie’s original tale, the novel resonates with the cynicism and violence of classic noir without losing the sense that this is the same world of eternal childhood japes that the Darlings found. The more fantastical elements, such as fairies, maintain a certain otherness that produces an engaging counterpoint to the solidity of American urbanity and capitalist corruption.

While Handman does not actively go out of his way avoid the obvious metaphor of adult concerns destroying childhood innocence, this is very much a gritty thriller filled with fast-paced action, dogged investigation, and a protagonist who is as much criminal as hero rather than a veneer of story over a portrait of human nature.

Unlike some novels that revisit to classic settings, signature elements of Neverland are fully integrated into the plot rather than merely appearing; thus, while Handman does not shy from allowing a reader’s potential knowledge of Barrie’s world to lead them astray, the events unfold as they do because they occur in Neverland rather than their unfolding also taking the reader on a tour of Neverland.

Stark is a most engaging and characterful protagonist—if not one who will necessarily appeal to readers who wish their detective to possess, or at least achieve by the end of the book, a moral clarity. While neither Barrie nor adaptations of Peter Pan portrayed Hook’s pirates in particular depth and nuance, Handman manages to infuse a sense of continuity without engineering circumstances to be ones that happen to be especially amenable to the skillset of a pirate.

The supporting cast are a sound fit for the setting and plot, built around detective noir tropes but given individual tweaks that make them more than stereotypes. Handman’s handling of those who have come to Neverland after modern civilisation had settled in is perhaps particularly realistic, with a few seeing the events of Peter Pan as childish imagination, a few assuming they mean other equally implausible things are true, and many having let the differences become mundane unless they are forced to acknowledge them.

Overall, I enjoyed this novel greatly. I recommend it to readers seeking gritty urban fantasy or crime noir.

3 thoughts on “Shadow Stitcher: An Everland Mystery by Misha Handman”