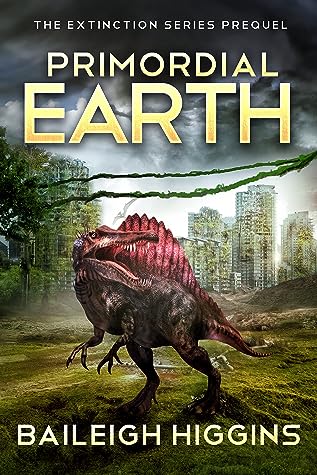 Higgins presents three moments from her protagonist’s life, each showing a different obstacle arising from being cast into the prehistoric.

Note: while the author is blessed with a spiffing surname we are unrelated by blood or marriage.

For thirteen-year-old Seth, it was supposed to be a joyous journey bringing his mother home from hospital. However, when a mysterious flash causes a multi-car accident, he finds himself sprawled next to the wreckage in a world that radically different from moments ago. To make matters more confusing, and much more dangerous, this world seems to contain dinosaurs.

This novelette is divided into three sections: Seth’s immediate struggle to survive being cast into apparent prehistory; Seth as a young man being accused of a crime by the leaders of a city of the displaced; and Seth as an older man living alone in the wilderness. Each of these covers a brief period, from a couple of hours to a day, and features few characters other than Seth.

While this contributes to a feeling of severance from modern civilisation and immediate need to act in the first segment, the brevity and close-focus of the other segments leaves the reader without a wider context; thus, although they do stand alone, they might well feel more like snapshots of history than stories in themselves to readers unfamiliar with the series. Conversely, readers familiar with the series will not feel that they are repeatedly being told things they already know. Therefore, while chronologically first in-world, this might not be the best entry point for the series.

Higgins’ narration is very much plainly descriptive rather than metaphorical or lyrical in style, and contains frequent exposition. Thus readers are likely to have little to no difficulty knowing what is happening. However, this focus on events and facts rather than character perceptions also gives the book something of the feel of a witness statement, which might weaken some readers sense of immersion or emotional connection.

The three ages of Seth are each sympathetic protagonists, displaying character development that stems from greater life experience rather than any radical changes in personality.

Those few supporting characters who appear are not without personality but are very much transitory, creating the sense that—although they might be heroes of their own stories—they are very much passing moments in The Story of Seth.

Overall, I found this novelette engaging as a supporting text. I recommend it to readers seeking more details of Seth’s life before the events of the main series.