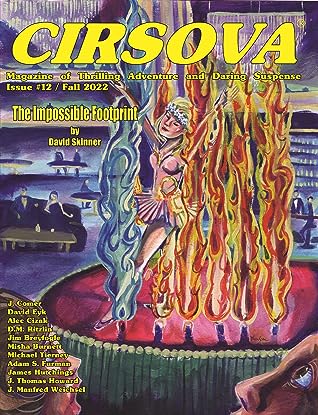 Alexander gathers tales that, while they are set in very different worlds and might not always agree on all the nuances of morality, are united by their focus on people of strong character taking action rather than succumbing to circumstance.

This magazine contains six short stories, two novelettes, and three extracts from longer works, each evoking the feel of classic pulp, along with a sizeable review of Jerry Pournelle’s Janissaries series.

Alexander features a range of different styles and genres from within the broad church of speculative pulp fiction, meaning that readers who incline toward science fiction or toward fantasy, prefer their heroes morally pure or with feet of clay, or have other preferences are likely to find things to their taste.

This diversity equally means that readers looking to devour in one or two sittings rather than take in smaller bites are unlikely to suffer the heavy fog that can come from too much of the same thing.

Taking a piece from a longer work always risks dangling threads or missing pieces, and so readers who expect a story to be utterly complete in itself might not be satisfied with all the contents; however, Alexander’s choice of extracts each display a complete arc and tidy enough ending that they feel like a justifiable serialisation rather than a blatant scheme to sell the next edition.

Overall, I enjoyed this magazine. I recommend it to readers seeking speculative fiction that captures classic pulp without feeling like a pastiche.