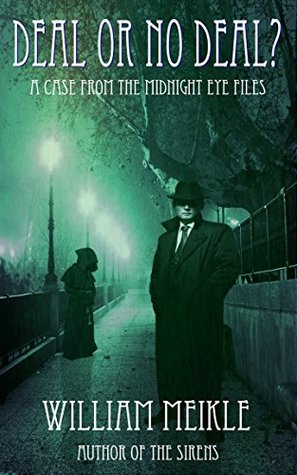 Meikle crafts a tale of a detective with a love of mundane spirits finding himself facing the supernatural kind.

There’s nothing unusual about private eyes being asked to find people. However, rather than the usual tale of a missing family member, Derek Adams’ latest client shares a tale of university friends selling their souls for beer and crisps thirty years ago as a joke that is starting to look less funny to him now one of them has died in troubling circumstances. The client just wants Derek to find his former friends and ask them to get in touch; however, when he discovers something else does seem to be hunting them can he leave them to their fate?

Blending elements of detective noir and supernatural horror, this novella could be glossed as “what if M.R. James wrote about the mean streets of Glasgow?”; and readers who find themselves intrigued by that thought are unlikely to be disappointed. However, there are flickers of social commentary within the creepy moments and gritty detection that make this more than a ghost story with the posh Victoriana replaced with grit and whisky.

While the opening segments of this book are about locating people who have not gone out of their way to be locatable (or even made themselves difficult to contact for reasons unrelated to the drunken deal), so could play out identically whatever the truth of matters, Meikle does not tease confirmation that something supernatural is almost certainly going on. This raises questions of not only whether Derek will choose to do more than he is being paid to do but whether he can do anything, adding an extra tension to the mundane uncertainty of a search through seedy and secretive areas of Glasgow.

Having established early on that this is supernatural-horror detective noir, Meikle’s handling of the second half of the arc and the denouement establishes this is equally detective-noir supernatural horror with whisky, dodgy contacts, and pragmatism taking centre stage over complex metaphysics and abstruse mysticism. Depending on reader preference for the defeating of curses, the swift practicality and moral ambivalence of the ending might feel an entirely fitting blending of genres or a let down.

Derek is an entirely suitable protagonist for this story, cynical enough that he is believable as a private eye but with enough prior experiences of the potentially odd that he does not maintain an irritating refusal to accept there might be something more that confirmation bias behind the growing creepiness. He is neither prone to deep bouts of self-examination nor driven by an underlying idealism, making him a character who will engage those readers who enjoy protagonists with feet of clay more than those who like to see the protagonist develop into a good person through adversity.

The supporting cast are each firmly based in gritty crime tropes but possessed of nuances of character that make them more than stereotype. This creates a setting that is very much mean streets with shadows that are too deep but one that has the feel of a specific and real Glasgow—albeit possibly not quite the one in this world—rather than being a generic noir city.

Overall, I enjoyed this novella. I recommend it to readers seeking supernatural horror with a gritty detective aesthetic.