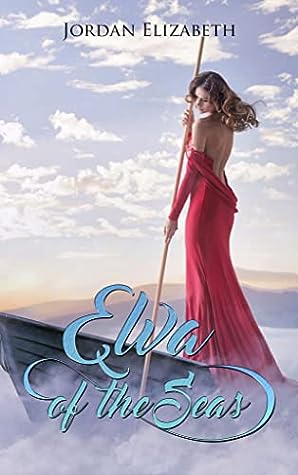 Elizabeth reverses the fantasy trope of a commoner rising to become the monarch, instead following an heir who is replaced. Combined with fast-paced action and an interesting world, this creates an engaging variation on the standard tale.

This is the third book in Elizabeth’s Serpent Riders series. Possible spoilers ahead.

Elva spent most of her life as heir to the throne—until her younger sister turned out to be the reincarnated former queen of a former dynasty and restored peace. Hoping to at least escape the constant reminders that she is surplus to requirements, Elva heads for a distant villa her parents once holidayed in. However, when her ship is attacked she discovers that, even if she thinks her purpose is gone, some people still think her royal blood will make her very useful.

Where the previous two volumes were focused on young women who were mostly disregarded discovering that they possessed great authority, this book takes the opposite premise: a young woman whose entire life has been one of privilege in expectation she will become the most powerful person in the nation struggling with having become meaningful only through her relationship to another. However, underlying this overt reversal is the same arc of going from defining oneself by the status others grant to defining oneself by one’s own abilities. This blending of difference and similarity creates a sense of continuity with the previous volumes while avoiding the echo that a third tale of a little-considered young woman rising to the highest position by grasping a new magical power might create.

Also, unlike the first two books, this is a novelette about being captured by buccaneers rather than a full novel about reforming a kingdom. This narrows the focus onto personal matters and dramatic action. However, with the previous volumes being filled with character-driven fast-paced action, this again does not feel like a jarring change of direction.

Starting the tale shortly after the end of Lisha of Kachine, Elizabeth almost immediately sets forth into a new area of the world with new qualities; this both creates a greater sense that Elva is severed from her old life and reduces the need to reprise events from previous books to provide context for present actions. While there is likely to be more emotional impact for readers who are familiar with Lisha, depending on a reader’s tolerance for just going with the flow, this separation from the setting of past novels might be enough to make this an acceptable entry point for the series.

Containing both sea serpents who bond with human riders and airship pirates with mechanical arms, this book sits in the liminal zone between magical fantasy and steampunk. Although it might therefore not suit genre purists, Elizabeth skilfully draws on the dangers of each, resulting in the intersection amplifying the tension rather than pulling in opposite directions or collapsing into absurdity.

Elva is a well-written protagonist whose perspectives and capabilities develop plausibly within the context of a swashbuckling fantasy yarn. She is also full consistent with the Elva of Lisha; as Elizabeth does not shy from displaying the unconscious privilege she has from being the heir to the throne, some readers might not find her perfectly sympathetic to begin with but this is likely to pass as she moves outside her comfort zone.

The supporting cast, while smaller to fit the shorter format, display a pleasing depth and nuance.

Overall, I enjoyed this book. I recommend it to readers seeking fast-paced fantasy action with a protagonist who isn’t the stereotypical chosen one.