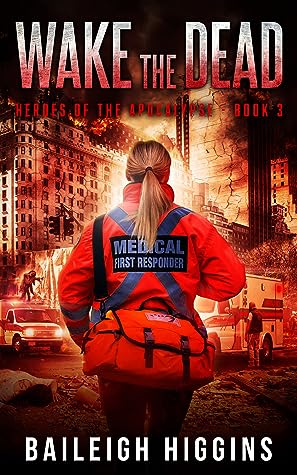 Higgins delivers another highly plausible tale of post-apocalyptic struggle that shows the biggest threat to life can be the absence of the infrastructure that Western society assumes will exist.

Note: while the author is blessed with a spiffing surname we are unrelated by blood or marriage.

This novel is the third in Higgins’ Heroes of the Apocalypse series. Possible spoilers for the previous volumes ahead.

With the buildings surrounding the fire station secured against zombies and space found for the new arrivals, things seem—if not perfect—less bleak. However, when a single moment of carelessness lets the infection slip in, their nascent sanctuary faces being torn apart by zombies and recrimination.

Higgins continues her decency-positive interpretation of how humans face a crisis with another arc where the greatest challenges of a post-apocalypse world are the lack of infrastructure and appropriately skilled people rather than criminality and decadence. While this is certainly more optimistic about human nature than most zombie fiction, the sense of real risk remains, meaning it shares the tone of small victories amid many reasons not to hope.

This decency is however not taken to extremes. Higgins does not gloss over the fact people, especially people under constant stress, can give in to dogmatism and selfishness rather than always being saints. In addition there are fleeting mentions of people having been victimised by people who have throw aside civilisation; depending on each reader, these might create a subtle sense the fire station is an island in a less civilised world or feel a little too distant.

Where Higgins’ focus on showing the good might go a little far for some readers is in providing the moment a second group of survivors pass within sight of the fire station from their perspective; while this does fit the theme of groups uniting rather than fighting, knowing in advance that they are good people somewhat weakens the tension in the scenes where the inhabitants of the fire station wonder whether it is safe to make contact.

As in previous volumes, Higgins’ dialogue features the repetitions, agreements, and speaking conventions that feature in real-world conversations but are often omitted in fiction. Depending on reader preference, this might either support the sense that, as members of the emergency services, many of the characters are trained to be accurate and precise or create a dissonant note of slowness among the tension and action.

While Higgins provides context for situations and decisions that stem from the events of the previous books, meaning that readers could enter the series here, the ending leaves a number of threads unresolved; thus, this novel does not fully stand alone.

The protagonists continue to be sympathetic, displaying the virtues one would expect of members of the emergency services while possessing sufficient assumptions and conflicting priorities that they are complex and real individuals rather than irritating paragons of perfection.

This is less true of the newly introduced protagonists who in a couple of cases, while not ciphers, appear long enough to reveal to the reader that there is a conflict but not to show that conflict actually manifesting; thus, the reader might be left with the sense of a personality cliffhanger.

The supporting cast are, as previously, well-rendered ordinary people who have drives and personalities that create drama but are not “the bad apple” that many post-apocalyptic dramas have.

Overall, I enjoyed this novel. I recommend it to readers seeking a tale that shows people trained to deal with emergencies might make a reasonable showing when society collapses without losing the drama of that collapse.