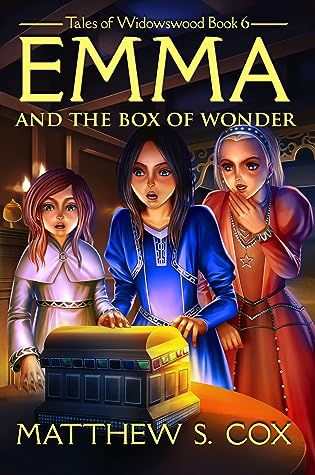 Cox skilfully balances the simpler perspective of the young with the underlying complexity of realistic worlds, creating a fast-paced fantasy adventure that is accessible without sacrificing depth.

This is the sixth volume in Cox’s Tales of Widowswood series. Potential spoilers for prior volumes ahead.

Emma and her sister Kimber expect spending the day with their friend Ambril to be fun; unfortunately, they pick the morning that thieves intend to kidnap Ambril and raid her father’s coffers. Barricading themselves in the strongroom, the girls think things can’t get worse—until the jewellery box Ambril’s father just received from a distant land turns out to be designed to transport more than jewellery.

As with other Widowswood novels, Cox opens not with a fantastical event but with an event that will be familiar to many pre-teens: visiting a friend whose family are different from one’s own in some way. For, while Emma’s specific position as the daughter of the rumoured Witch of the Woods is based in magic, her visit to Ambril Starling is fundamentally the same friendship between a poor family and a rich one that occurs in real life. And Cox skilfully evokes this from a middle-grade perspective, not avoiding the issue of adult prejudices altogether but casting them as something Emma is half-aware of but sees as mostly daftness.

Having created this powerful foundation of common experience with the reader, Cox builds into the fantastical, moving into the strange but still mundane plot of kidnapping for ransom before launching into the fully magical with a plot that hurls the three girls not merely into a different strata of their own society but into distant lands. This staged development keeps the reader in Emma’s village for longer, increasing the sense of separation when Emma is seeking to return, without leaving the reader waiting for the “good stuff” to start.

Cox’s world building is equally engaging beyond the areas covered in previous volumes. While his portrayal of desert cities, snow-dwelling tribes, and dark elves are not notable departures from existing fantasy tropes they are possessed of nuances that grant them a freshness that is all the more skilled for being delivered through the simpler perspective of a pre-teen narrator.

The magic system is of particular note, delivering something that is both a vehicle for exciting adventures and a highly plausible approach to the question of why different nations might have different experiences of magic.

Although Cox’s plot is less convoluted, and vocabulary less abstruse and less earthy, than that of an epic-fantasy doorstop, he displays the strong grasp of pacing and language that marks his more adult work, resulting in a fast-paced quest to get home that is accessible to all ages without losing the depth that more mature readers might seek in a fantasy novel.

The narrative forms a strong arc with a clear and complete conclusion, and Cox smoothly includes context for events and choices that grow from previous books; however, without the broader revealing of the world and Emma’s position in it that pervades the previous volumes, readers might not fully feel why certain things are so significant. Thus, this might not be the best entry point for the series.

Emma remains a highly sympathetic character, possessed of intelligence, common sense, and drive that make her an active protagonist while also subject to the frustrations and puzzlements that will be familiar to readers of her age.

The supporting cast are carefully crafted, those of Emma’s generation displaying a diversity of drives and experiences that firmly shows children are unique and complex individuals with valid internal lives, while those who are adult displaying a light strangeness that captures a child’s experience of adult concerns without making them seem shallow or absurd to readers who have more experience of adult life.

Overall, I enjoyed this novel greatly. I recommend it to readers seeking fantasy that is suitable for middle-grade readers without being childish or simplistic.