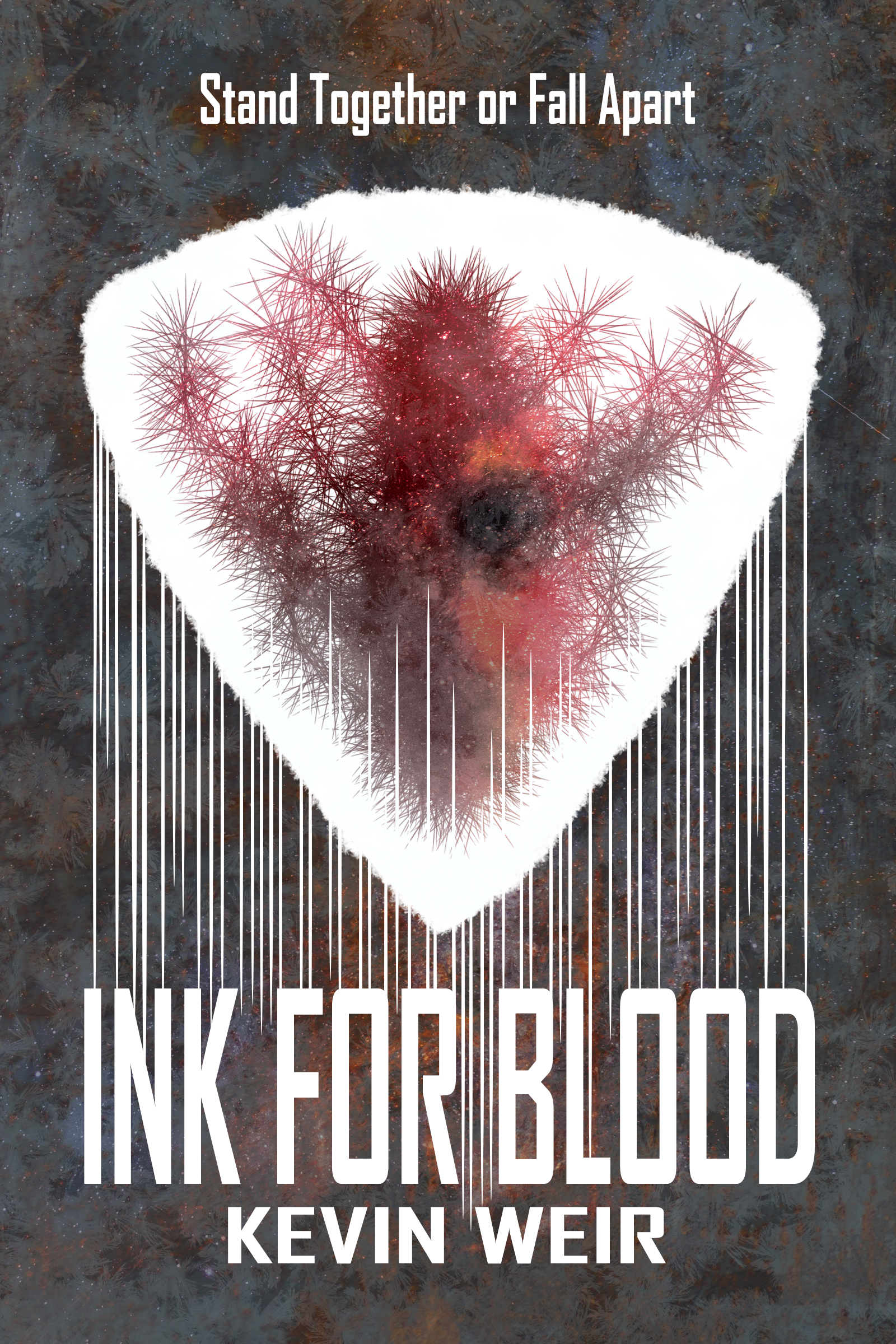 A century ago, the Great Machine appeared on the English coast, offering a way to fight back against the mindless parasitic sludge called the Mire. Now the nearby settlement of Wrotdam is a thriving city, home to the Church and source of the Ink which both empowers the warriors who hold back the Mire and fuels amazing new technologies. However, when the Mire surges forth in a rarely seen massed assault, instead of the usual mindless infection, a few of those who face it notice signs of a focus and purpose. If the enemy is more than a mindless ooze, surely the Church would need to know; so why are they refusing their own scholars permission to investigate?

Weir creates a world where the industrial revolution happens through discovery of a vastly powerful and almost universally applicable fuel, creating a strong steampunk/dieselpunk aesthetic of chain-bladed swords, bolt-action lightning rifles, and ether-powered electrical devices. However, in contrast to the usual scientific rationalism of the -punk aesthetic, the discovery came through visions received by a bishop and is administered by a religion that considers the fuel the gift of God and the Machine it is received from one of His angels. This adds a gothic mysticism of dolorous bells, Mire-repelling candles, and plague-doctor-masked sharpshooters who hunt those who go mad from too much congress with the Ink.

As befits the tale of a struggle against animated muck that turns humans into mindless servants, both the enemy and the methods of fighting them are brutal and messy. Although Weir’s descriptions of this are designed to convey the horror the people of Wrotdam (and the world) face rather than be merely salacious for the sake of it, this does mean that readers who do not enjoy body horror might find parts of this book too visceral for their taste.

While it would be easy to compare this blending of body horror, creepy mystery, and baroque technology with a number of franchises or authors—and fans of those are likely to find the same resonances—Weir’s world is very much its own, internally consistent weirdness rather than a reprising or echoing of something else.

The story unfolds in three parts: the few hours of desperate fighting during which the Mire surges forth in unexpected force, the struggle for answers in the days after it is beaten back, and many months later as the incompleteness of those answers becomes evident.

The first of these parts is told in short interwoven sections, each from a different character’s viewpoint. In addition to creating a sense of the chaos of a street-fight against strange creatures and allowing Weir greater opportunity to show various parts of his world rather than have a narrator describe them, this creates dramatic ironies which increase the reader’s awareness that something is wrong with the official narrative without necessarily revealing what the truth is or why there might be inaccuracies.

Where this showing-through-glimpses might not work perfectly for all readers is in the exact power of sawbones, the semi-secular warriors who consume Ink to bolster their abilities against the Mire. While Weir’s scenes certainly show them being better than human, the lack of a relatively solid benchmark for how much better might leave some readers unsure in a few places whether the situation is actually a major threat to a character or not, weakening tension.

The second and third parts continue to follow a portmanteau cast, some of whom were protagonists of the first part, but adopt a more linear approach of events that involve more than one protagonist being narrated more completely by one of them rather than in multiple fragments by many of them. While this does remove some of the need for readers to piece events together, it also removes access to the internal dialogue behind most people’s actions in a scene; thus, the building of a mental model of how the inhabitants believe the world works is replaced with a puzzling out of who might be driven by a different belief, adding a pleasing tension to the unravelling of how the world really works.

Although it is not necessarily what many readers would expect, the revelation of that truth is in hindsight consistent with events and maintains the same tone of creepy weirdness.

Weir’s portmanteau of protagonists are skilfully crafted, both as sympathetic individuals and contrasting aspects of his world. While there are the obvious binaries, such as belief in the Church’s mission vs belief is hiding something and Ink-fuelled killer vs executioner of the Ink-possessed, most of the clashes and commonalities are the result of personality and conflicting drives within each individual; thus, the protagonists form a realistically human web of imperfect but genuine choices that both echoes the uncertainty over the Machine and the Mire at the heart of the plot and forms obstacles to uncovering the truth.

The supporting cast share this sense of underlying, incompatible, drives and perspectives, both adding to the sense of gothic horror and to the reader’s sense that these are real people in a complex world rather than stock characters in a moral tale.

Overall, I enjoyed this novel immensely. I recommend it to readers who enjoy well-paced action and engaging characters in a baroquely weird world.

I received an advance copy from the author with a request for a fair review.