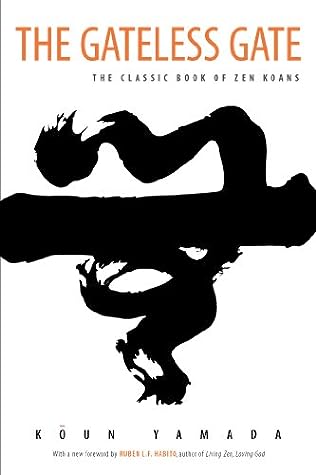 Yamada provides a series of explanations and comparisons that help place the ancient Chinese text in a modern context.

This book interleaves Koun Yamada’s translation of Wumen’s Mumonkan, a classic Zen text, with Yamada’s own lectures on each of Wumen’s koan and supporting comments.

The book is divided into forty eight chapters, each covering one of the koan Wumen gathered in his Mumonkan, bracketed by introductory front-matter and as series of supporting appendices.

Each chapter opens with a translation of the koan (crudely, a story or question designed to cause the audience to challenge their assumptions) and Wumen’s own commentary, followed by the text of a teisho (a type of lecture designed to help the audience in improving their own realisation of an underlying truth rather than teach knowledge or practice) Yamada gave to students on the koan and commentaries. While Yamada’s lectures are aimed primarily at assisting Zen practitioners rather than academically studying the text, his chosen audience is Twentieth Century Westerners; as such, he includes significant amounts of background information on the stories, people, and practices that the koan refer to or emerge from. This is likely to greatly assist readers who are not already very familiar with early India and Asian history and theology in separating Wumen’s frame of reference from his intended message.

Yamada expresses himself, both when translating and when setting out his teisho, in an accessible and fluid style that—while it is not always lightly entertaining—has the feel of what is often called the “popular academic” style. Whether the information and presentation also aid in spiritual understanding or only provide an engaging perspective on Zen beliefs will almost certainly depend on what the individual reader is seeking.

Although the book does have much to offer those who are purely interested outsiders, the one thing that some non-practitioners might consider missing are explicit answers to any of the koan.

In addition to chapters on the forty-eight koan chosen by Wumen, the book contains appendices on Oryu’s three barriers and Amban’s forty-ninth koan. These commentaries on works that are themselves reactions to the Mumonkan are less detailed than many of the chapters; however, readers who have found the core of the work to be of interest or value will almost certainly find them similarly engaging or useful.

As with most translations of any work, Yamada’s translation differs from other translations of Wumen’s work into English. As Zen Buddhism uses nuances of language as tools to an even greater extent than many other religions, and koan represent one of the areas where that is most strongly manifested, practitioners might find considerable benefit in the opportunity to compare interpretations that this difference offers.

Overall, I enjoyed this book immensely. I recommend it to readers seeking greater understanding of what Zen and koan in particular are in practice rather than theory.