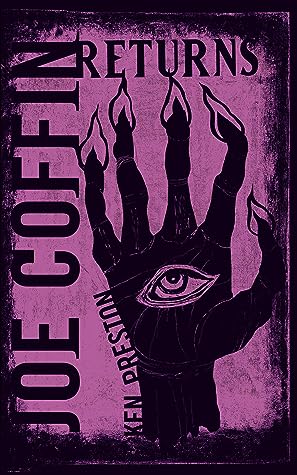 Preston continues his fusion of modern British underworld thriller and vampire tale, showing the aftermath of a human victory without either losing tension or parachuting in a new threat.

This is the seventh book in Preston’s Joe Coffin series. Your opportunity to be surprised by previous volumes might be drained beyond this point.

Vampires still walk the streets of Birmingham at night, but—after Joe Coffin killed the last of their leaders—they are more of a nuisance than a plague; some are even suggesting they deserve rights. Some, such as DCI Nick Archer, want to start fresh. Others, such as Emma Wilde, can’t quite leave the past behind. Coffin is gone but, when a YouTube celebrity is captured by vampires who don’t seem interested in his blood, those who joined him against the vampires—friends and allies of convenience alike—realise that the remnants of the vampire army are not the only evil lurking in the fog.

Preston’s novella (or part-work novel) opens several months after Joe Coffin departed Birmingham, supposedly for good. After a short segment about the discovery of a strange crime scene some distance from Birmingham, it switches to the attempts of Johnny B Tough and Lei, the Fearless Vampire Killers, to make money from the increasingly less dangerous vampire infestation, then to the current activities of several other protagonists from the series. While the title gives away that Coffin is not as free of the supernatural as he’d believed, he is most notable as an invisible but hulking presence in the lives of others.

While Preston does smoothly insert references of key past events and his mythology is based in classic folklore, so that fans of vampire horror are unlikely to feel utterly lost, much of the power of this book lies in not the fact of the characters having faced vampires in the past but the subtle nuances of how they did and how they interacted with each other through the six previous volumes. Thus, this book’s core audience is solidly readers who are seeking more of Preston’s modern underworld vampire fusion.

However, unlike some returns to previously concluded series, Preston neither has the big bad turn out to have only appeared to be destroyed, devaluing the previous victory, nor has an entirely unconnected threat rise up, making the advantages the characters gained useless. Instead, the new issues that draw the survivors together or pull them apart expand out from the consequences of how the vampire invasion was broken, and from various passing references or cool background moments from volume one onward. Thus the plots of this volume feel fresh yet firmly part of the world, attached with narrative sutures fine enough that readers are likely to struggle to work out whether Preston had always intended to continue the story past the previous volume and if not when he started seeding the possibility.

In addition to fitting the new seamlessly into the old, these expansions reveal the answers to some questions over which fans of the series might have speculated, answers that, although they might not be what a particular reader imagined, are not tawdry in comparison to speculation.

Some of the threads at the start of the book prove connected while others remain separate. This creates a sense of a wider world with problems and desires beyond vampires; however, as this is the first part of a longer work, readers must speculate how many unconnected things are glimpses of a wider whole.

And this is very much the first part of a longer story rather than a stand-alone volume in a series. Although characters find answers to some pressing questions or reach milestones in their personal arcs, the book ends on a strong cliffhanger.

Preston’s characterisation paints a highly plausible picture of people reacting to a significant and unusual threat having been overcome: Johnny and Lei portray the temptation to profit from the aftermath; Nick exemplifies the desire to move on, with all the righteous anger toward those who aren’t as rigorous; Emma suffers the restless seeking that might come from the supposed normality of the future being boring in comparison to the intensity of what has been; and the supporting cast show that familiarity can make even slavering packs of monsters seem less of a constant horror—especially if some young influencer with a sport camera and an unconscious belief in their own immortality decides to prank them live on social media.

Overall, I enjoyed this book greatly. I recommend it to readers who enjoyed the previous volumes and those seeking supernatural horror that feels gritty because the world is rather than for the sake of it.