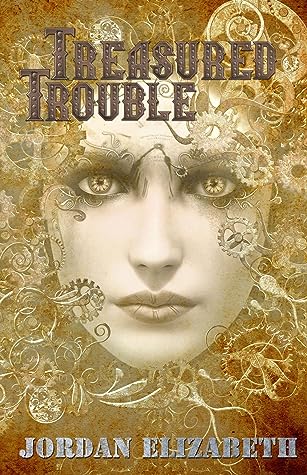 Elizabeth builds a series of short stories around the characters and histories of the protagonists rather than new aspects of the world, creating a collection that offers depth rather than event-of-the-week style diffusion.

This short story collection includes eight stories set in the world of Elizabeth’s Treasure Chronicles, all but one occurring prior to the start of Treasure, Darkly.

Each of these is a complete short story, flowing from inciting situation to resolution. However, while Elizabeth includes sufficient background that readers who have not read any of the main series will not lack factual context, at least some of them rely on knowledge of who the characters are or will become during the series for emotional context; thus, readers who are not familiar with the Treasure family already might find some parts a little flat.

Where the benefit of reading these after the series does potentially become somewhat of a requirement is in Clark’s ability to interact with the dead: although this mostly appears as the common paranormal trope of a ghost pestering or helping, a significant challenge and opportunity in one story does rely on aspects that are neither well-known tropes nor explicitly explained.

In contrast to new readers, those readers clamouring for more of the Treasures, to whom Elizabeth dedicates the collection, are likely to find exactly the character-focused pieces and expansions of glossed incidents they seek.

Elizabeth’s characterisation is skilled: the protagonists in the first seven stories each present as younger, and thus less competent and rounded, versions of the people they will be at the start of the main series, while still displaying the underlying core that makes them what they become. This is especially obvious in the case of Amethyst, who is every inch the spoiled young socialite but is still troubled by injustice where she sees it, making her major flaw not that she is shallow or callous but that she sails forth to sort out issues in the belief that being rich and popular protects against problems.

As character-focused short stories, the supporting cast is small and appears relatively briefly. However, Elizabeth provides sufficient nuance and distinctiveness that these short moments have a sense of being part of a complex life off the page.

Overall, I enjoyed this collection. I recommend it to readers seeking more of Elizabeth’s paranormal steampunk western setting.