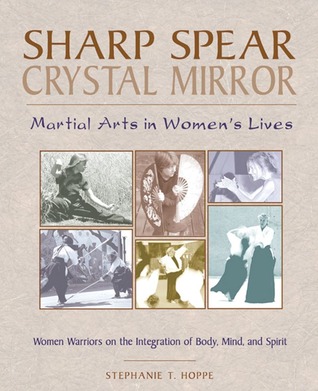 Focused primarily on the specifics of martial arts practice but also showing how those experiences pervade other areas, Hoppe provides female perspectives on what is stereotypically a very male world.

The core of the book is formed of twenty chapters, each opening with a brief foreword by Hoppe about the context of the interview then setting out the interview itself verbatim. These are bookended by an introduction giving a little of Hoppe’s own involvement in martial arts and reasons for writing the book, and an epilogue setting out how doing the interviews reinforced or changed her perceptions of women in martial arts.

While all the interviewees are based in the United States, Hoppe has selected martial artists from many martial arts (both well-known and less so), aged from twelve to eighty years old, from a diverse range of backgrounds; thus, the interviews provide a relative spread of perspectives and foci.

Compiled in 1990 and mostly featuring women who have risen to seniority in their arts, many of the specific challenges and events mentioned in the interviews relate to the equal rights struggles of the Seventies and Eighties, potentially giving them a patina of historical document to some readers; however, some insights, such as the need for self-defence training that reflects the risks and situations faced by all groups rather than just assuming the biggest dangers are the bar fights and such faced by average men, apply equally in the modern day and beyond those who identify and present as women.

Although many of Hoppe’s interviews come via introductions or recommendations from her contacts or interviewees, meaning there is a certain slant in those selected, the primary criteria is being in martial arts rather than having a particular outlook; thus, the book includes distinctly different perspectives on mixed training, social roles, the place of violence, and other matters. As the interviews set these within a wider context of each woman’s art and life, the reader can see how these might make sense; thus, readers who are interested more in gender politics or human nature rather than martial arts specifically are likely to find things of interest.

While some of the interviewees incline more strongly toward an esoteric aspect to why martial arts works, rather than a strictly scientific theory based in biomechanics and psychology, the book is very much focused on the practical impact and experience of martial arts and not the abstruse or mystical.

Hoppe’s style is more chatty than formal or objective, allowing a space for the interviewee’s experience and thoughts and co-operating in bringing them forth. Depending on reader preference, this approach might seem more a promotion of personal narrative or a failure to test assertions.

Overall, I enjoyed this book. I recommend it to those seeking perspectives on martial arts and surrounding culture that are broader than the media representation of a Segal, Norris, or Chan.