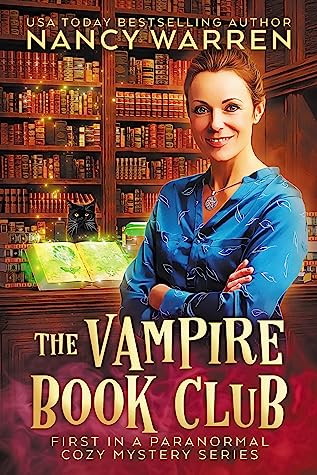 Warren interweaves the hidden tensions of village life with the slightly fantastical, creating an engaging murder mystery where magic and the supernatural add both solutions and problems.

After breaking the cardinal rule about using magic to change fate, Quinn Calahan is sent to run the bookshop in a small village in southern Ireland. Resolving not to make her situation worse by breaking the conditions of her exile, she resigns herself to a boring life for the foreseeable future—until she discovers a murder in the shop the night before it was due to reopen. Drawn back into the investigation at every turn, she starts to wonder if the magic she messed with is coming home to roost.

As might be guessed from the title, this novel is, unashamedly, a cosy paranormal mystery, featuring amateur sleuthing, curious (in both senses) vampires, myriad red herrings, and a setting that is—apart from murder—a slightly politer and lighter place than the modern world.

While Warren does perhaps show rural Ireland through a hint of rose glass, this is well within the bounds of improvement that the presence of good witches might cause making it seem realistic in context.

Equally, although—like all cosy mysteries (paranormal or not)—the central role taken by the protagonist in uncovering the true culprit is somewhat implausible, Warren makes good use of the logistics of rural Ireland to add some sense of plausibility to the protagonist getting involved and the police not immediately shoving them well away.

The mystery itself relies on human nature rather than any magical characteristics of Warren’s world, making it if not something a reader would do something readers will viscerally feel is within the bounds of what people might do.

A number of other plots interweave with the mystery, providing red herrings, time-conflicts, and the sense that the village is part of a complex world rather than merely a backdrop for the murder. Although most of these are resolved, a few remain as leads into later volumes in the series; as nothing is left in the middle of the action, readers are unlikely to find this too irksome; however, those hoping for the full story of why Quinn is sent to the book shop will be disappointed.

Magic and the supernatural, while a pervasive presence, are parallel rather than superior to the mundane, providing different methods and issues rather than offering easy answers. Quinn’s inability to solve the murder with a wave of a wand is further complicated by her being a newcomer in an area with resident witches and other creatures; thus, even where magic might give an edge, there are suspects who could counter her abilities. This provides a pleasing balance between making the world different enough to be paranormal and keeping the investigation needed to be a mystery.

The novel is set in the same universe as Warren’s Vampire Knitting Club series and does feature an appearance by characters from those books; however, Warren provides enough context that readers who have not read any of that series will not be confused.

Quinn is an immediately sympathetic protagonist, having done something wrong for what are understandable reasons. This more than balances the slight mopes and moans of having been exiled and then tangled in murder, making her seem realistically complex rather than irritatingly angsty. Her aversion to and then involvement in the investigation are similarly well done, preventing her seeming implausibly enthusiastic for someone with no detective experience while also avoiding her remaining a passive observer. As someone with no relevant experience, she does bumble in a few places but ultimately succeed; depending on reader preference, this might either seem pleasingly realistic or slightly too much reliance on fortune rather than skill for a proper mystery plot.

The supporting cast are each a solid blend of cosy mystery trope and unique detail, creating a village of characters readers will easily believe could politely murder each other.

Overall, I enjoyed this novel. I recommend it to readers seeking a mystery that is complex without being byzantine in its twists, and that has the lightness of cosy fantasy.

One thought on “The Vampire Book Club by Nancy Warren”