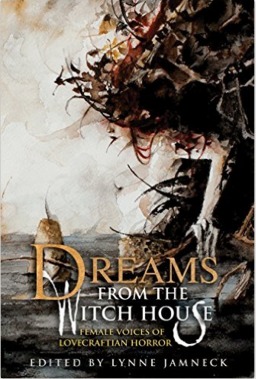 Jamneck applies a broad rather than narrow criteria to both female voice and Lovecraftian horror, resulting in a diverse range of stories.

This anthology contains twenty short stories and novelettes that portray a female-perspective on an incomprehensible universe.

As Jamneck’s own introduction opens with, the question of what is or is not Lovecraftian is a tricky one. Rather than adopt a narrow answer and select only stories that utterly conform, Jamneck takes a broader approach of selecting stories that combine a female perspective with Lovecraft’s cosmicism or the wider popular phenomena of Lovecraft; thus, stories featuring women encountering the same incomprehensible situations as Lovecraft’s protagonists that are written as straight cosmic horror sit beside comedic pieces satirising the absence of female voices in Lovecraft’s own work. While none of the works is weak measured purely for what it seeks to be, depending on reader preference, this range will produce either a pleasing variety or an annoying sense of deviation from “true” Lovecraftian horror.

After the stories, Jamneck includes a statement from each of the authors about their story. As with the stories themselves, some of these display a more overt connection to Lovecraft’s own work and themes than others. While short, these may be of interest to readers who enjoy hearing an author’s intent with a work.

Overall, I enjoyed this collection greatly. I recommend it to readers seeking a mix of classically Lovecraftian tales and wider riffs on cosmicism.