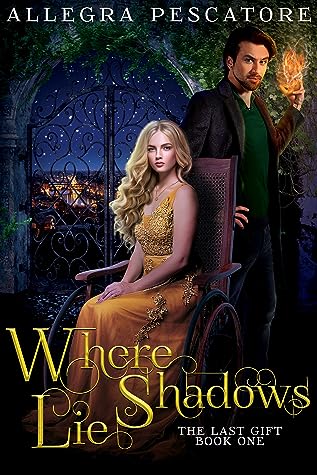 Disguised as foreign diplomats and secretly aided by the heir to the throne, Gabriel and his companions attempt to end the tyrannical rule of the King of Lirin. However, when half the group—including the prince—are killed in a trap, Gabriel is forced to flee using Elenor, the king’s second child and new heir, as a hostage. At first, Elenor believes she has been captured by brutal criminals, but as the conflicting images of her brother as decent sibling and secret traitor erode her certainty, she starts to question which side is right. Unfortunately for both of them and the other rebels, there are more than two sides and none of them have any compunction about sacrificing the lives of a couple of young people who think the world should be better.

Opening with a close-perspective attempt to assassinate a king then shifting to the perspective of a powerful magic user struggling to balance the conflicting demands of several gods regarding ancient pacts protecting noble families across the known world, Pescatore makes it clear from the outset that this is character-driven epic fantasy.

With the survivors of the rebel group running from reprisals, Pescatore swiftly adds further perspective characters. While, as with much epic fantasy, this dispersion of focus does mean readers are more at risk of losing track, each of the threads (including that of the mysterious magic user) remain—at least for a significant minority of the book—connected to the capital of Lirin rather than racing into other areas. Thus, they interweave, providing new, and sometimes conflicting, information on what might really be going on and what the world might truly be like. Pescatore skilfully wields this dramatic irony, allowing the reader to see that certain apparent cruelties or benefices are motivated by more complex reasons than mere poor or good character, while both maintaining the plausible emotive reaction of the characters and denying the reader all the answers they need to be certain what is the truth.

This undercutting both of what characters ‘know’ to be true and of what various cultures consider moral expands as the threads diverge into other parts of Pescatore’s world, offering the reader an opportunity to experience the world rather than merely be told what it is. With even the slave taking nation having an opportunity to explain why their way is moral, this is not a book for those who eschew moral relativism in favour of strict good vs evil binaries; however, neither is the moral discussion allowed to take over from personal struggle and conflict, allowing readers who are simply less concerned with the philosophical to enjoy the novel for its complex politics and dramatic action.

As expected of the first volume in an epic fantasy series, this book raises world-spanning plot threads that are not resolved and leaves protagonists in perilous circumstances. However, the main arcs do reach significant milestones, be it a sizeable political change or a new clarity of understanding, so readers are unlikely to feel cheated of an ending.

While this book includes a lesbian romance, the disdain that attracts seems to stem from the unsuitability of the lover and the displays of affection rather than it not being heterosexual; thus this novel is an LGBTQ book in the sense of representation but not in the sense of being driven by LGBTQ issues.

Elenor is an engaging and sympathetic protagonist, who neither relentlessly clings to her naive loyalty to her father in the face of evidence nor throws in with the rebel cause after the flimsiest of struggles. Her struggle to do the right thing, on a mental and physical level, exacerbated by the chronic damage done by a childhood illness that has left her legs weak; as with her intellectual struggle to support the right side, Pescatore neither makes this limitation an angst-ridden centre to her narrative nor treats it as an inconvenience that only appears when other challenges aren’t taking the stage.

Gabriel and his rebel companions are similarly balanced between decency and imperfection, fillling their arcs and interactions with a plausible mix of fantasy heroism and all-too-human selfishness.

In contrast to the youthful protagonists, Daemon, the ancient magician protagonist, is a cynical political player with no compunction over sacrificing the innocent for his own schemes. While his behaviour is motivated by a traumatic past and some of his endeavours are commendable, neither he nor Pescatore suggest this excuses the darkness of many of his other actions; thus, while there is the possibility he might redeem himself in later volumes, he is very definitely more an interesting villain than an anti-hero.

The supporting cast are well-crafted for a political fantasy, with even the actually decent people possessing secret drives that subvert their apparent altruism.

Overall, I enjoyed this novel. I recommend it to readers seeking epic political fantasy that balances the relativism and complexity of real political scheming with the heroic drives of classic fantasy heroism.