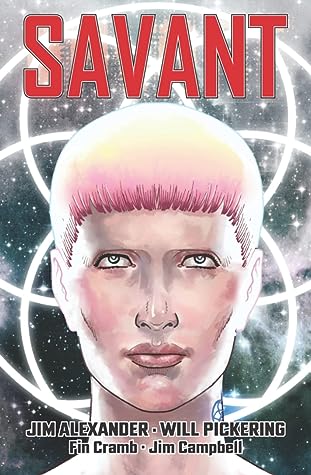 Alexander, Pickering, Cram, and Campbell reference the art and sensibilities of classic sci-fi comics without being constrained by them, creating a graphic novel that will appeal equally to fans of aesthetics and plot.

Possessing the ability to experience the emotions of others, Lode has travelled the universe chronicling the lives of the dying. When the government of the planet Hubris ask her to use her ability to hunt down a brutal rogue security agent, she grudgingly agrees. However, as she and a small team of agents travel into the wilds, it becomes clear their quarry’s madness is contagious.

Filled with semi-benevolent infections, thought-copying technologies, and interstellar travel, Alexander’s universe is a futurepunk extravaganza. However, under the joyously full-on aesthetic is an emotionally complex plot on the madness of war reminiscent of classics such as Conrad’s Heart of Darkness.

Alexander skilfully balances the style and the substance, crafting a world where the strangeness is internally consistent and the characters react as if the technology is, if not normal then feasible, without causing the reader to see the weird as tawdry or mundane.

The plot is equally well balanced, maintaining a sense that morality is more than relative while facing the reader with escalating questions about where the line between justified and unjustified eradication of a group or idea lies.

The line and colour work have a plausible oddity to them; for example, the elite special forces team who accompany Lode pair high-tech ballistic environment helmets with shirt and tie. These visual subversions of the normal add a powerful sense that this is a world very different from our own, both in technology and society, without exposing it to the risk that the future will become dated in comparison to modern progress, or that exposure to too many overtly alien creatures will evoke the absurd rather than the unsettling.

Like the text of any well-crafted print book, Campbell’s lettering is almost self-effacing, making the text legible and readable rather than standing in the foreground; however, there is a bespoke application of line thickness and spacing that moves it beyond mere transcription into art of its own.

The story, prose, and illustrations exist as a fluid whole, making this firmly a graphic novel rather than an illustrated story. Indeed, as (ironically) befits a work featuring complex parasite-human interactions, the various creators pass the reader’s experience between themselves to apply the best tool for the job; perhaps the clearest example of this lies in two otherwise identical panels which convey as significant event purely through a change in the colouring.

Although the illustrations are stylised and have a softness to them—so are not photo-realistic—this novel features both body horror and the personal impact of genocidal war; thus, this is not a work for those who are troubled by the visceral.

Lode is a highly sympathetic character, her abilities and personality making her both out of place in a brutal war and entirely suitable to solve a problem that using violence against violence hasn’t.

The supporting cast are equally engaging, each very clearly marked by war but displaying very different reactions to it from doubling down on their ethos to embracing a decadent nihilism.

Overall, I enjoyed this graphic novel greatly. I recommend it to readers seeking science fiction with depth and weirdness whether or not they also enjoy the art of comics.

I received an advanced review copy from the publisher with a request for a fair review.