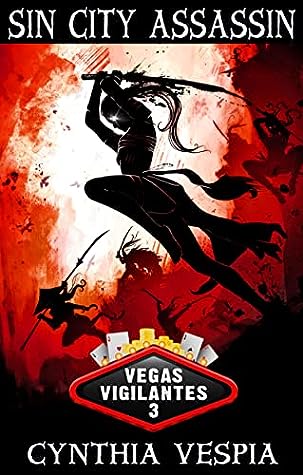 This novel is the third in Vespia’s Vegas Vigilantes series. Spoilers are possible.

After waking up with almost-total amnesia and a bullet wound to the head, Nico discovered her exceptional agility makes her a great thief. When her partner and sort-of-lover is arrested just before a heist, she decides to do it anyway; however, when her information proves faulty she ends up running from both Dex—a special investigator for the authorities—and the vampire whose property she messed with.

Vespia’s plot interweaves two classic tropes: a power struggle between gangsters and a back-from-the-dead revenge arc. While set within a Vegas that has a secret supernatural community and featuring characters with more-than-human powers, the underlying drives and challenges are the same, creating a fast-paced and engaging series of twist and turns that would not be out of place as the plot of a crime thriller.

However, this book is more than supernatural-as-colour; as well as being interesting flavour for the various groups and schemes, the powers that feature shape each sides preconceptions and how they solve issues in more than trivial ways. Thus, although not perhaps vampire horror in the strictest sense, it is certainly a novel where much of the horror is a product of vampires existing.

The plot arcs, as befits an urban-fantasy crime thriller set in Vegas, are dramatic action rather than painstaking introspection, creating a strong feel of being in a Hollywood movie; however, their course and conclusions are not implausible within the world created.

This action movie feel is perhaps most overt in the romance plot: both that there is one and that it unfolds in a Bond-like tumble-into-lust rather than a more nuanced coming-to-realise. Depending on reader preference, this might either feel a little disappointing or a pleasing escape from two people almost wilfully failing to notice they like each other.

While this is the third volume in the series, so mentions events and characters from previous books, the plot doesn’t rely on knowledge of them beyond the tangential references; therefore, this book will both stand alone and function as an entry point to Vespia’s world for readers who do not mind the mild risk of spoilers.

As with the previous volumes, the narrators’ voices contain the occasional non-standard phrasing or word choice. Although this doesn’t obscure meaning—and might even seem a virtue to some—readers who are sensitive to grammar and syntax might find this reduces their immersion.

Nico is a well-crafted protagonist for the story. Her amnesia sits in the sweet spot between being a trigger for action with no downsides, and causing constant angst and danger. However, while both her handling of the amnesia and reactions to learning her past are plausible, some readers might find the explanation of her exceptional prowess a little sparse.

Falling firmly into the role of “honest lawman who will bend the rules for justice” without being merely a stereotype, Dex is both a solid contrast for Nico and an engaging character in himself.

The supporting cast are the crisply defined tropes that often fill action-thrillers. However, Vespia does add touches of nuance, making this feel more like a focus on fast-paced plot than shallowness.

Overall, I enjoyed this novel. I recommend it to readers seeking an urban-fantasy crime thriller that is more about heists and schemes than flashy powers.

I received an advanced review copy from the author with a request for a fair review.