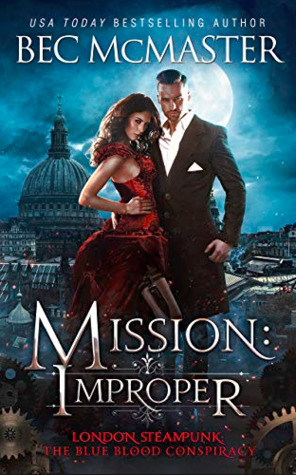 McMaster fuses behaviours common to all humans with an engaging mix of fantasy and Victoriana, creating a novel that offers something for fans of both paranormal romances and steampunk thrillers.

This novel is set after the events of some of McMaster’s London Steampunk novels and might include characters from those. Thus, this review might contain spoilers.

Bastard son of a vampiric noble, Caleb Byrnes has become one of the cities best criminal investigators; so when he receives an invitation to join an elite team dedicated to protecting the Crown from the darkest and most powerful threats he leaps at the chance. However, his first case teams him with Ingrid Miller, a werewolf who once humiliated him in a private bet. It’s bad enough having to work with someone when he works best alone, but how can he focus on the case when her mocking presence threatens to break the icy calm that keeps him from being a monster?

McMaster’s setting is classic paranormal steampunk, fusing the supernatural, wondrous mechanisms, and 19th Century English society. Depending on reader preference, this mix of James–Bondian gadgetry, cybernetic limbs, and mystical powers might create either an engaging sense of a different world to our own or an immersion-damaging sense of two many competing things.

McMaster’s portrayal of “Victorian” London might similarly divide readers: unlike the social veneer of some steampunk stories, there are strong political currents, both within and between classes, that shape the events of the book and society seems altered from the real world due to the presence of both overt supernatural citizens and innovative devices in a way that is not implausible; but these variations also mean that characters and events are not simply Victorian with gears on.

The portrayal of the supernatural is similarly not stereotypical. While verwulfen are, at least in this book, a well-written but unshocking combination of werewolf tropes, the vampires invert a classic trope with the aristocratic but semi-human Blue Bloods who form much of the nobility being those who have not fully transformed into the more powerful but animalistic vampires. This mix of the standard and the bespoke both adds a freshness and mitigates the issue of supernatural creatures outclassing humans.

McMaster’s plot starts a while after a speciesist Blue Blood regime has been overthrown, a human Queen enthroned, and equality (legally if not perfectly) granted to verwulfen, mechanicals, and others. While McMaster’s previous series details this revolution, so readers familiar with those novels might notice nuances, the references in this book to those characters or events are provided with sufficient context that readers entering the universe here are unlikely to feel they lack the information to understand circumstances or reactions.

As befits a story set just after a revolution, the plot features both those who wish a return to the old order and those who think the revolution didn’t go far enough. This opens the interesting possibility that the crimes at the heart of the plot might be orchestrated by extremists on either side or by someone seeking to use that to conceal something else.

Although this novel focuses mainly on Caleb and Ingrid, this tension between the Blue Blood establishment and the newly equal others also runs through the specialist team Caleb joins, adding both side plots and additional challenges to the investigation.

In parallel with the supernatural spy thriller, Caleb and Ingrid struggle to understand and then express their true feelings for each other. Forced together again after a previous collaboration ended in both considering they did the work, and in a stupid sexual bet, they are already primed to reject each other. Each the product of a deeply traumatic childhood, any attempt at building rapport is mired in defensive performance and trust issues, resulting in each slip or kneejerk risking a feedback loop of self-protective behaviour. Thus, while their romantic dance around each other is plausibly not short, some readers might find the length of time they take to even realise their feelings let alone act is frustratingly long. Conversely, other readers might enjoy the romance all the more for the obstacles overcome.

Caleb is not necessarily a pleasant character from the first page but he is very much sympathetic. His advantages of being a trained investigator and Blue Blood are balanced by prejudices and inadequacies from his childhood traumas. Thus, he is plausibly highly competent yet occasionally foolish, both professionally and personally.

Ingrid is superficially the opposite of Caleb, passionate when he is buttoned-down; however, much of her approach to life is similarly a trauma response, both providing a limitation to her competence and an engaging mix of contrasts and commonalities to Caleb’s facade.

The remainder of the team similarly display, although not forcefully enough to drown out Caleb and Ingrid, strong flawed personalities that drive and impede their efforts. As with many paranormal romances, there is a slight sense that those who seem least fitted might become the protagonists of their own novel in the future.

The other supporting cast are an engaging mix of clear traits and hints of nuance suitable for the extend of their appearance. This creates a sense of a world beyond events shown in this story.

Overall, I enjoyed this novel. I recommend it to readers seeking steampunk investigation or paranormal romance that embraces the core tropes of the genre without succumbing to staleness.