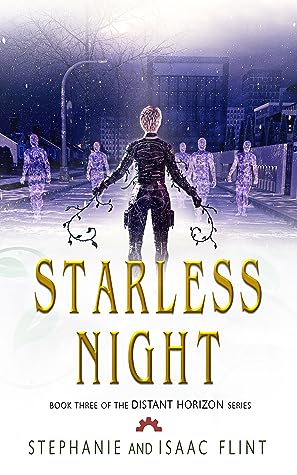 The Flints combine the action and politics of supervillains and superheroes teaming up against a common threat with the uncertainty of someone who cannot trust their own mind, creating science-fiction that is both fast-paced and emotive.

This is the third book in the Distant Horizon series and refers to events in the Glitch series. Possible spoilers for previous volumes beyond this point.

Faced with the growing and indiscriminate threat from Legion, the Camaradie, the Oriental Alliance, and the rebels have agreed to work together. In theory, Jenna Nickleson’s life should be easier. However, a peace treaty doesn’t mean everyone has set aside their plans of world domination forever. And worse, the brain seed—a synthetic personality implanted in her head by a megalomaniacal telepath—is growing stronger. If she doesn’t get it out of her head soon, she risks harming her friends and family and ceasing to exist altogether; but if she does find someone with the power to edit minds, how can she trust they won’t simply turn her into what they want instead?

The Flints do not open with a prologue and, while there are reminders of events and information from past volumes, these appear almost solely as snippets triggered by current events. This immerses the reader in the current situation from the first page, creating an immediate sense of threat that can be missing in books that open with a reprise. However, as this book continues the story from two series, neither of which has a minor or simplistic plot, some readers who come to this volume a reasonable period after the previous ones might struggle to recall the full context of some things to begin with. This makes the novel almost certainly not a good entry point for readers unfamiliar with the world.

The novel is woven of two major threads: the battle in Jenna’s head between her personality and the implanted one; and the struggle between Legion and the new shaky alliance of human factions.

Jenna’s struggle to retain control is told from a mix of Jenna’s perspective and the brain seed’s; while the story is only told from the perspective of the brain seed when it is in control and Jenna does notice when the brain seed is pushing hard, the Flints skilfully include moments that might or might not be the brain seed more subtly influencing matters into scenes from Jenna’s point of view. This means the reader must infer which behaviour is actually Jenna and what shifts the battle lines from growing patterns and repeated triggers, evoking the paranoia and uncertainty Jenna herself feels.

This paranoia is enhanced by the possible solutions she can think of or is offered, whether technological or psychic, are in the hands of governments that use them to remove free will from their citizens and individuals who are unapologetic about their previous brutalities and selfishness.

With the brain seed influencing her reactions or perceptions or even taking control, and stress causing her to make imperfect decisions, Jenna’s friends and family do suffer. Indeed, the inserted personality, as with many in the real world who seek to utterly subjugate another’s will, uses harm to others to apply pressure to Jenna to surrender or to punish her for defying it. And, entirely plausibly, she often blames herself rather than simply accepting she is not responsible for harm done by the synthetic infiltrator personality. While it is hard to speak with utter certainty about a situation that doesn’t exist in the real world, the Flints’ portrayal of Jenna’s angst and analysis paralysis feels realistic. Depending on reader preference for decisive protagonists, this extended self-doubt will either be powerfully emotive or start to feel overdone.

The same sense of paranoia and uncertainty over how to actually fight pervades the fight against Legion: the various factions might be working together but that doesn’t mean they are open to sharing all their resources and information, preventing them applying their various advantages efficiently; and even when they are working together, Legion’s aims are unclear and its tactics changing from those it used shortly after it broke free of control, making it hard to know how and where to oppose it.

While the two threads are separate, with the entire book being from the Jenna/brain seed perspective and the brain seed having both views on and information about Legion that differ from Jenna’s, they intersect frequently, more often adding to the difficulty of Jenna’s choices than not.

However, for all that this is both a novel centred around the desperate struggle against an insidious threat and clearly a part of an ongoing narrative, there are significant arcs that end positively; thus while it is definitely not cheerful, it does end in a better place than it started.

Overall, I enjoyed this novel. I recommend it to readers seeking an exploration of what it might be like if one’s mind could be rewritten by others.