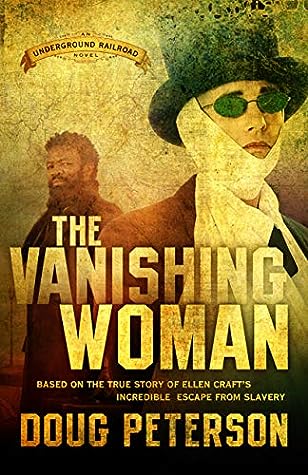 Peterson weaves historical fact with strong inference and complex characters, creating a tale that is more engaging than dry narrative but all the more harrowing for being true.

The child of a slave and her master, Ellen Craft was born with skin as pale enough to seem white. Pale enough that she and her husband William hatched a plan to escape the plantation and travel to the northern USA disguised as owner and slave. Successfully impersonating a white woman for the many days it would take to reach the North would be tricky enough, but a white woman travelling with a male slave would stand out almost as much as two slaves travelling without a master; so Ellen must also pretend to be a man.

Peterson bases his novel on the true story of William and Ellen Craft’s 1848 escape from Georgia and the subsequent attempts to recapture them. While the only detailed source is from William’s perspective, Peterson chooses to narrate the story from Ellen’s; while this does—as Peterson states in his author’s note—mean that a larger amount of the story is imagination rather than fact, moving the focus to the experience of a black woman forced to impersonate a white man creates both a more visceral feeling of the struggle and opens up more complex perspectives on racism.

This slant toward an engaging story of daring escape from slavers rather than a strict autobiography is further evident in Peterson’s use of multiple timelines, interweaving scenes on their journey to freedom with significant moments from their pasts that put previous choices in new contexts. While this does mean that the reader might not experience quite the same tension in some scenes because they already know Ellen is free later, it does more intimately connect specific incidents of oppression in the past to those in the present, strongly evoking the power of racism to stain entire an entire life.

However, this novel is not short on tension. Although Peterson might have already confirmed Ellen is free and (physically) unharmed at a later date, this does not usually tell the reader how she evaded a threat or at what cost. Thus knowing that Ellen Craft died many years later as a free woman doesn’t remove the sense of constantly being on the verge of discovery that pervades many of the scenes.

This air of relentless threat is compounded by Peterson’s use of parallel narratives about Ellen’s relatives and other characters close to her, about whose fate the reader is unsure as they go in and whose ultimate fate might either be unknown or most unfortunate. Complementing these threads from the points-of-view of slaves are those from the perspective of slave owners (or wannabe slave owners), which offer the reader some escape from the bleakness by showing bad people failing yet also add tension by showing how close they are on Ellen’s heels.

Ellen is a well-crafted and highly sympathetic protagonist, defined not by exceptional intelligence, unique skills, or other things often make a protagonist better than others when faced with challenge but rather by her refusal to give up and accept her place as worse than others. While this stamina of spirit is a major asset, it also causes issues; for example, her refusal to consummate marriage until both of them are free because the children would be born slaves puts immense strain on her relationship with William.

William and the other significant supporting cast are also fully realised people rather than figures in a historical moment. While this nuance personalises the narrative, avoiding the simplicity of monolithic black slaves vs. white oppressors, it also makes those white people who feel they are the ones wronged by ungrateful slaves seem all the more flawed because it is clear it is not simple what everyone thought.

Overall, I enjoyed this novel greatly. I recommend it to readers seeking a tense historical thriller that also portrays experiences of being black in Nineteenth Century America.