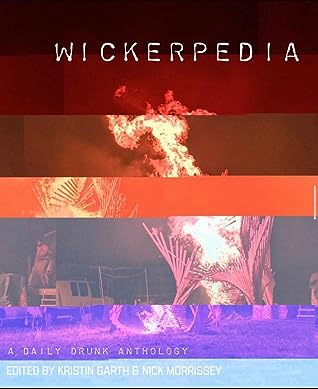 Mixing perspectives on the power of belief, both good and bad, to shape lives with attempts to capture the experience of believing, the Garth and Morrissey create an experience as filled with poetry, awe, and horror as the films that inspired it.

This anthology features twenty poems, five flash fictions, three articles, and two pieces of visual art based upon, related to, or evoking the classic 1973 folk horror The Wicker Man or the 2006 remake.

Garth and Morrissey gather a range of perspectives on the morality of each side, from the pagan leaders cynical populism in Madison McSweeney “Festival Song” to the arrogance of performative Christianity in Clem Flowers’ “Solace in the sight of lavender on the chain of abandoned wagon wheels out by the communal tents”, to the wishing for some blending of the two worldviews in Sean D. Zucker’s “Ritualistic Sacrifices Aside I Could Have Used Summerisle’s Sex Education in High School”.

Teenage years are awkward
by design

—“Ritualistic Sacrifices Aside I Could Have Used Summerisle’s Sex Education in High School”, Sean D. Zucker

The fundamental conflict between world views that sits at the heart of each film is similarly portrayed from multiple angles, from the mutual failure of compassion and reason in Barlow Adams’ “Quiet As A Church Mouse”, to the unconscious incompatibilities of Monique Quintana’s “crow fashion”. This perhaps reaches its extreme in Jay Fraser’s essay “Order Set Alight – The Radicalism of the Wicker Man” which explores the idea of the original film not as a clash between societies but between structured and instinctive social structures.

Men are that way, the wantonness
of bonfires, the easy piety thrown around…

—“Conflagration as a state of being”, Peach Delphine

Morrissey’s introduction paints the two films as mystical as well as anthropological documents and the selection seeks to reflect this with both evocations of how devotion can elevate sacrifice such as Marisa Silva-Dunbar’s “Hecatomb” and warnings of the dangers of ignoring the symbolic such as Juleigh Howard Hobson’s “I Saw A Hare”.

While not explicitly saying it, Sam Distefano’s “Not the Bees!!! In Defense of Nicolas Cage’s performance in 2006’s the Wicker Man” might be read as the revelation of an archetype not mentioned in discussions of Tarot or the collective unconscious: not the Divine Fool, stumbling toward danger through loving openness, but the Abhorred Idiot, drawing the danger to them through hateful dogmatism.

Although weighted with the thought-provoking, the collection is not without its humour and pastiche, including a Christopher Lee fan at the opening of wicker-furniture shop and a satirical suggestion about which animals might be acceptable to burn in an effigy.

Wifi? Sounds sour. We have our own networks, right and proper.
The looped handwriting of wheeling birds.
Salt-spray omens and dark soil portents.
If the bees won’t tell you, ask the worms and beetles,
Or Mr. Markham down at the post office.

—“Oh Come Ye To The Fair (But Not You, Stranger)”, Magda Knight

The two pieces of visual art are, on the surface very different: Rasiqra Revulva’s “I’ll Not Want” layers pressed flowers over watercolour whereas John “Hoss” Taylor Jr.’s “Burning Wicker Man” takes the format of a black-and-white single panel cartoon. As with all art, absent a label informing an audience of what the artist’s message is, these pieces exist as a blending of what is presented and how the individual perceives it. Thus, while Revulva’s sparse collage more immediately opens itself to thoughts of the rural vs urban and to questions over whether any feeling of disquiet is actually present or only imagined from context, Taylor’s work—with its flip caption and format instantly familiar from newspapers, The Far Side, and other sources—might equally challenge the unconscious picking of sides that so strongly pervades both our experience of the films and life in general.

Context, or the lack of it, is likely to create the biggest division in reader experiences. Garth and Morrissey’s curation is based neither in overt reference to one or both films nor in the evocation of the same themes but in a blend of both; some works rely heavily on references to a film while others make no mention of it. Thus, some readers unfamiliar with one or both films might find certain pieces as inaccessible or trite as koans to the uninitiated Western reader while readers drawn by a love of the film might struggle to see even a glimmer of why a few works were included.

Taken as a whole, Garth and Morrissey succeed in collecting “a wealth of interpretations”. However, the absence of strongly pro-Howie/Malus work to balance suggestions of the positives of Summerisle creates a noticeable—if understandable—gap in the anthropology; or, to the more mystical reader, perhaps reveals a hidden completeness.

Overall, I enjoyed this collection greatly. I recommend it to readers who prefer the speculations and imaginations that the films provoke to definitive answers.