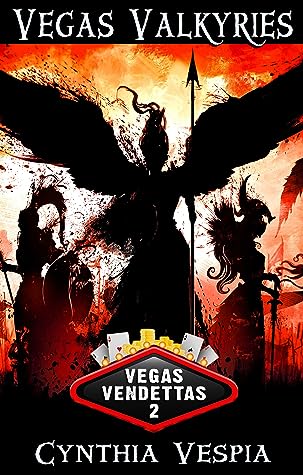 Vespia mixes aspects of Norse mythology with a modern Las Vegas, creating an urban fantasy tale that will appeal to readers who enjoy a fresh take on well-known tropes.

This novel is the second in Vespia’s Vegas Vendettas series. Reading beyond this point is gambling on spoilers for the first book.

When Sigr, Kava, and Bryn were cast out of Valhalla, they turned their experience as valkyries into a career as bounty hunters in Las Vegas. Specialising in magical criminals, they harbour hope that each wrongdoer imprisoned brings them closer to Odin accepting them back. The arrival of Hel, Queen of Death, seems the perfect way to show Odin they are worthy to be valkyries; but how can Bryn and Kava put the good of the world ahead of human lives when the people they love most are in danger? And how can Sigr see clearly when Hel’s plan brings back memories of why they were cast out?

Vespia opens with a brief note saying that the novel is inspired by Norse mythology but not always true to it. This is fair warning as, while the difference is nowhere near as stark as that between Eastern European myth and Twilight, this is very much modern urban fantasy romance flavoured by Scandinavian myth. Thus, readers seeking the intersection of traditional Norse gods and monsters with modern society might be disappointed.

However, Vespia’s inspiration is more than a veneer of names and famous traits over a generic plot. The moral division slants toward honour in combat, oath-keeping, and other Norse values, giving the book a subtly Viking flavour. Those very familiar with the myths and Old Norse might also wonder if certain choices are deliberate hidden jokes.

In addition to the main thread of trying to foil Hel’s plans for Las Vegas, Vespia weaves two romance subplots: one for Bryn and one for Kava. Each of these is superficially about not being able to share that they are a chooser of the slain fallen to Earth and still involved in an aeon-spanning supernatural conflict; however, at anything other than a superficial level they are very much the nuanced specific experiences of individuals struggling to connect with other individuals. The complexity of keeping secrets is made greater by Sigr having been cast out of Valhalla because of love, so her sisters initially believe they cannot reveal their own love to the others.

With a key challenge of the main plot being whether the trio have lost their ‘valkyrieness’ during their time on Earth, the romantic subplots feed strongly into doubts over whether they have become too human; this interweaving becomes tighter when Bryn and Kava’s lovers are themselves unwittingly drawn into Hel’s plan, making loyalty to them a possible threat to victory.

Sections of the plot rest on events that happened in the previous volume. However, the protagonists uncover sufficient fragments of these and remember enough rumours that readers unfamiliar with that book are unlikely to feel lost.

Where reader experience might be strongly divided is in the narrative style. Vespia’s prose contains a noticeable level of non-standard phrases and usages (for example, ‘breaking someone’s height’ rather than pulling them down or ‘beset around a pit’ rather than standing around it). Although this doesn’t obscure meaning, readers are likely to differ on whether the narrative voice is a distinctive dialect that adds to the effect or a jarring distraction from immersion.

The three valkyries possess a core similarity but each have different areas of competence, drives, and flaws; thus they present as a plausible mix of engagingly human character and supernatural embodied task.

This sense of a defining feature and surrounding complexities is shared to a lesser extent by the supporting cast—with humans slanting more to the complex and supernaturals more to the archetypal—creating a sense they are at the heart of their own narrative rather than merely there to interact with the protagonists.

Overall, I enjoyed this novel. I recommend it to readers seeking an urban fantasy story driven by the choice between saving humans and being human.