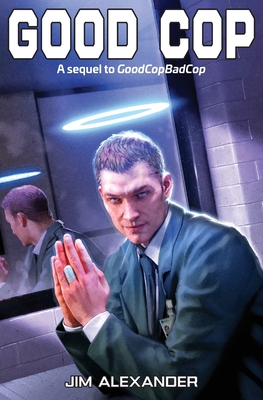 Alexander weaves the gritty hunt for a brutal killer with portrayals of everyday selfishness and cruelty, creating a thriller that shows the trauma of facing humanity’s darker side without excusing the imperfection of the investigators.

This novel is the sequel to GoodCopBadCop. Spoilers ahead.

When Detective Inspector Brian Fisher leapt from a tower block onto a crime boss below, he intended to die stopping one last villain. Instead, he woke up in hospital, assumed to have somehow survived an attempt to murder him. Even more miraculously, his attempt has silenced his ‘Bad Cop’ side. However, with the criminals of Glasgow expecting the legendary hard man and his first case back echoing a brutal serial killer from his past, can he leave the monster behind?

As with the previous volume, Alexander interweaves Fisher’s mental state with a gritty police thriller. Rather than the multiple crimes of the first book, the plot is centred around a single investigation into a potentially psychotic murderer; as events unfold, this expands deeply into disadvantaged and criminal areas offering the same image of pervasive physical and moral collapse as the previous volume.

With the first—known—victims police officers and Fisher’s reputation high enough he is almost a totem, he is allowed to return to work well before he has fully recovered. Unlike many heroic cop thrillers, this does not merely result in moments of weakness that add colour but ultimately don’t impede bringing the villain to justice; Fisher staggers, oozes, and nigh collapses in visceral detail.

While Fisher is committed to being only the ‘Good Cop’—or at least only pantomiming the cruel yet clever monster when needed—Alexander’s villain believes he needs to become something else. This provides a powerful contrast, showing the reader that Fisher’s choices are nowhere near as brutal as they might be yet conversely suggesting the possibility Fisher might be more morally culpable because he has enough control to have a choice.

Alexander parallels the differing impacts of Fisher’s and the killer’s mental health issues with an second ‘normal’ binary: DS Spencer, still not taken in by the aura of heroism that surrounds Fisher, provides a voice of mundane decency as she is forced to pick up the slack caused by Fisher’s physical unfitness; while the criminals taking advantage of the death of a crime boss and the presence of a deranged killer are as casually thuggish. Thus, as with the previous book, evil is ultimately a banal thing of selfish choices rather than some special flaw of the “mad”.

Alexander’s descriptions of violence are not a puerile attempt to shock; however, they are graphic, so this might not be a book for those who seek the intellectual complexity or emotional impact of criminal investigation without the glimpses of brutal inhumanity.

Fisher remains an engaging—if sometimes troubling—protagonist. The Hyde-like side of his personality from the first book is gone making him initially feel more pleasant; however, his behaviour is still erratic, with possible post-traumatic stress, the effects of his drugs and his injuries potentially affecting his judgement and provoking hallucinations. This instability is amplified by the current case echoing a brutal crime he discovered many years ago.

Overall, I enjoyed this novel greatly. I recommend it to readers seeking a gritty crime thriller that doesn’t shy away from the mental and physical unpleasantness of human immorality.

One thought on “Good Cop by Jim Alexander”