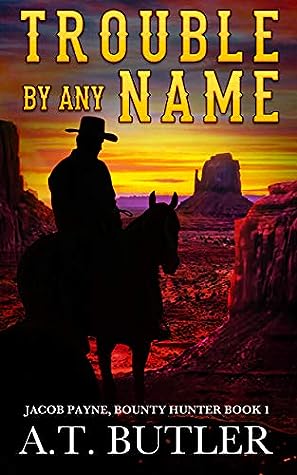 Butler weaves his own details around the tropes of classic Westerns, creating an engaging tale of frontier action and clear morals.

While dropping off his latest bounty with the authorities, Jacob Payne hears a rumour a man matching the description of a wanted murderer has been seen in nearby San Adrian, Arizona; unfortunately, it also says he’s the sheriff. As soon as Jacob reaches San Adrian, he’s certain he’s found his man; but with no evidence and even those residents who’ve got on the new sheriff’s bad side unwilling to get involved, how can he bring him in?

This novella echoes traditional westerns: there is no extended introspection over whether the new sheriff is the wanted man or not; instead, he appears shortly after Jacob’s arrival flanked by disreputable types, reacts to Jacob with petty threats and falsehoods, and—just to be certain it is clear—has a beard that doesn’t quite hide a distinctive scar; equally, Jacob as a hero, doesn’t hide why he’s in San Adrian or that he’s seen through the new identity; so, the plot proceeds in the narrow space between the sheriff not wanting to risk his hold on the town by openly acting against Jacob without cause and deciding Jacob is enough hassle to be worth doing something drastic.

As befits an archetypal contest between white and black hat, the novella is filled with tense face-offs, fast-paced action, and straight speaking. While creating a real sense of danger, the violence is not gratuitous and the language is clean.

Butler’s prose is plain but sometimes tends to the descriptive: characters do not merely see what is outside, they turn around, look out of the window, and see. Depending on reader preference this might create a distracting sense of over-explaining or evoke the lingering pans and cutting back and forth between faces from classic shows and movies.

Jacob is a simple—but not simplistic—protagonist, who is not stupid but approaches situations with directness and decency rather than deviousness or expediency. However, he is not preachy, and, while the moral thing usually works out, it does also make things harder, so he is unlikely to irritate those readers who prefer the heroes aren’t perfect.

The supporting cast are equally clear classic Western tropes: the bullying villain, the thuggish lackeys, the idealistic youth, the chaste young widow, and the honest townsfolk in need of a hero to save them. Although possessed of personality beyond the stereotypical, most will probably—like people the hero met in last week’s episode—not stick in the reader’s mind.

Overall, I enjoyed this novella. I recommend it to readers seeking a fast-paced tale of a decent man bringing a villain to justice.