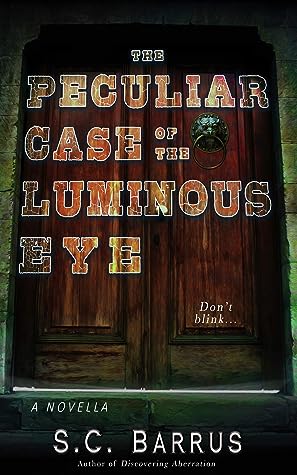 Barrus combines the Victorian gentleman scientist with a threat that does not tidily fit into human assumptions about reality, creating a novella that evokes classic tales of paranormal detection and cosmic dread without feeling dry or stilted.

Willem has devoted himself to the study of the liminal zone between biology, cryptology, and the aether sciences, an area the uniformed might call the occult. So when a young housemaid arrives on his doorstep claiming her employer’s eye is haunted by ghostly worms, Willem leaps at the chance to investigate—and hopefully earn a hefty payment.

Much like the occult detective stories to which it pays homage, this novella is set in a Victorian/Edwardian era where spiritualism and the paranormal is, while not a ubiquitously accepted thing, not an illegitimate area of study for an amateur scientist. Although the unravelling of the mystery is very much a matter of logic and experimentation rather than magic, Barrus swiftly makes it clear that the occult is real, placing this book firmly at the Lovecraftian rather than Holmesian end of paranormal investigations.

The narrative voice is somewhat objective, to the point of referring to most characters by their job rather than name, and filled with language appropriate to the period; however, Barrus does not overdo this, making it likely most readers will find it adds character and immersion rather than creating a barrier of pretentiousness or archaism.

Barrus balances plausible progress and reliable evidence with hints of a world outside human comprehension, creating a plot arc that—while not purely an exercise in logical deduction—avoids being random without losing its otherness.

While the descriptions are not expanded or extended for the purposes of titillation, this is a story about something alien infesting a person’s eye so Barrus does not avoid the visceral; this is therefore potentially not a novella for those who prefer their thrills of a clean or cosy nature.

Willem is a well-crafted protagonist for such a tale. While he is not emotionless and his subject area might be somewhat mystical, he approaches the investigation—and life in general—with a determined scientific rationalism that both shields him from the terrified speculation that might impede another and makes social interactions more challenging.

While Willem mostly confines the supporting cast to clinical units in his investigation, Barrus imbues them with hints of a complex inner life that both add realism and spark sympathy.

Overall, I enjoyed this novella greatly. I recommend it to readers seeking a gaslamp occult tale that captures the feel without being overly archaic.

One thought on “The Peculiar Case of the Luminous Eye: A Paranormal Thriller by S.C. Barrus”