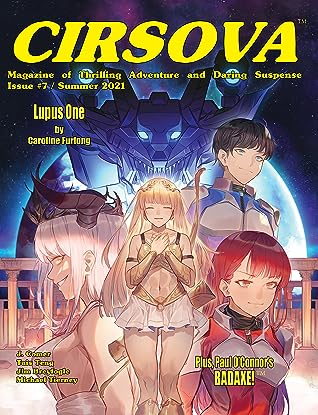 Alexander shows that stories which a focus on action over introspection needn’t be shallow or simplistic, continuing the legacy of classic science-fiction and fantasy pulps.

This magazine contains four short stories, the second part of two serialised works, and an extract from a novel.

The publisher has gathered a range of genres and styles, united by common threads of fast-paced action and pro-active protagonists. This produces a broad enough range that the reader unlikely to find stories becoming samey if they read it in a sitting while ensuring readers are also unlikely to only find the minority of the magazine to their taste.

While serialisation has always been a part of the pulp tradition and the parts of the ongoing works included do conclude minor arcs, readers who strongly favour complete stories might not find this the best introduction to the magazine.

In addition to ‘Badaxe’, this edition contains several illustrations by UsanekoRin and DarkFilly. These are by no means amateurish, and are cleanly and clearly reproduced by the publisher. However, while each person sees characters differently, some readers might find the choice to depict the Greek Goddess Athena as a large-eyed waif in the modern Japanese style somewhat jarring.

Overall, I enjoyed this magazine. I recommend it to readers seeking modern fantasy and science-fiction that is true to classic pulps.