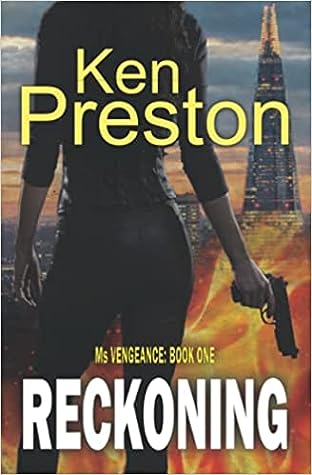 Stripping any trace of glamour from the trope of a parent targeted by a brutal conspiracy, Preston asks not just how far someone might go for their family but what that might cost.

After her husband and youngest son were murdered in a burglary gone wrong, Maddie moved to a small Scottish island with her two surviving children. Mysterious emails from a government minister claiming they need to meet overcome her aversion to London enough she plans a quick trip south; however, before she’s even left the station she receives another mysterious message; this one telling her to come immediately to a certain address if she ever wants to see her children again.

An innocent protagonist taking brutal revenge on a criminal conspiracy after it threatens their family is a familiar thriller trope. However, Preston’s tale is an engaging variation on the norm: his protagonist is not a retired military operative or someone whose job provides lots of useful transferable skills for investigation or fighting; instead they are an ordinary—if grief-burdened—mother. This both enhances the sense of a powerful and inexplicable threat that is plausibly still secret and makes the victories Maddie does achieve feel more meaningful.

While Maddie lacks the specialist skills of the usual action-thriller lead, this book is just as violent. Driven not just by her own desire to survive but an equal desire to save her children, Maddie reacts a fury that often lacks the strategic advantage of a trained response but is often as effective at dealing with the immediate threat. The thugs and murderers she faces in turn display a greater experience at violence, but little moral restraint, making their actions equally brutal. Preston, in a style that will be familiar to readers of his Joe Coffin series, presents this without any sugar coating; although this visceral portrayal is not used to titillate, the fact everyone is involved is human might make it feel even darker than that of gangsters vs vampires.

This pervasive grittiness is made both greater and more plausible by Preston’s world; while this is modern Britain, it is a Britain during an election in which a nationalist political party are predicted to win enough seats to form a government.

In between the violence, Preston reveals fragments of what might be behind the threat to Maddie and her family. This both provides a contrast to the brutality and, presented from the same perspective of an ordinary person scrabbling to deal with something they aren’t experienced with, creates a sense of confusion and paranoia that make this deeper than a simple revenge thriller.

The book ends with Maddie having achieved a notable success but not resolved either the entirety of the existing threat or the consequences of her actions. While this is not unexpected for the first volume in a proposed series, it fits the tone of this not being a Hollywood film where the hero gets a happy ever after after they defeat the bad guys.

Maddie is a well-crafted protagonist. Although, realistically, reactive in the face of unexpected extreme threat, she is not passive. As the plot unfolds, and she gains more information and possible allies of convenience, she does become more proactive; while Preston portrays skillfully portrays her understanding of events and her motivations, making it easy to understand why she make the choices she does, he neither makes those responses the only reasonable one based on her knowledge nor has her constantly driven by extremes of altruism; thus, even though they might understand her attempts at revenge, it is left to each reader to decide whether her actions are justified or excusable. This moral ambivalence is echoed in her other choices, most specifically her relationship with her children where she is driven to protect them but is also driven by the selfishness of her own grief rather than a selfless commitment to their best interests.

Maddie’s children each display their own unique signs of the trauma of having family members murdered, traits that are as jaggedly inconvenient and impolite as traumatic response is.

The rest of the supporting cast are equally nuanced, displaying interesting hints of the conflicting drives and irrationality of real people without dragging the focus from Maddie’s struggle.

Overall, I enjoyed this novel. I recommend it to readers seeking a gritty revenge thriller that focuses more on the cost of vengeance than the achievement.

I received an advance review copy from the author with a request for a fair review.