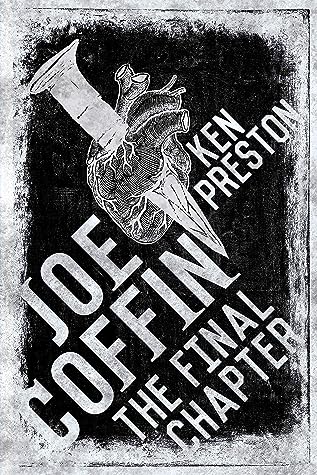 Preston fuses the horror of vampirism with the selfishness of ordinary humans, creating a world where even the overt threat of supernatural predators hasn’t reduced the profiteering, in-fighting, and rampant criminality.

This is (as the title suggests) the final book in Preston’s Joe Coffin series. Spoilers for previous volumes ahead.

Following Mortimer Craggs’ betrayal and death, the Slaughterhouse Mob is in ruins; and Joe Coffin is ready to get out of the gangster business. However, not everyone is happy to let him just walk away; and even if he can avoid whoever wants him dead, he can’t leave Birmingham while his son Michael is still running around as a vampire. Meanwhile, Emma Wylde is offered a job back at the Birmingham Herald; a job that almost immediately drags her into a new conspiracy. And, potentially worse, unknown to her, the police are aware that someone brutally beat Gilligan and left him for dead.

As with the previous volumes, the events of this book start almost immediately after those of the previous one. This lack of a lead in or slacker period between events creates a strong sense of endless threat that is ideal for a tale about warring gangsters and lurking vampires. However, it does also mean readers who do not have the previous books fresh in their minds might feel a little lost; while Preston does include neatly integrated reprises that ease this experience for those who are continuing the series after an extended gap, this book is unlikely to serve as a good first experience of Preston’s world.

Having hit the ground running, Preston accelerates. Those friends and allies who had a measure of safety or stability at the end of the last volume are swiftly drawn into danger again. Acquaintances who feature for the first time appear already shadowed by complex threats. And Coffin’s extermination of the leaders of the vampire threat and their followers has not cleared every pocket from the city. Whilst this does produce a mix of looming tension and fast-paced violence that verges on the relentless, readers who have enjoyed the rest of the series are likely to consider this a positive.

However, this book is not just scenes of terror and brutality; both Joe and Emma also face decisions about their future that, if not classically romantic, are certainly centred around love and relationships. This provides a realistic but still positive thread of normality to leaven the horror.

As with previous volumes, each of the plot threads—whether vampire-hunting or personal—is laden with distrust, conflicting agendas, and sudden reversals, both making the characters often their own worst enemies and ensuring their resources remain stretched without having to implausibly escalate the vampire threat.

The book brings the major characters’ arcs to a plausible conclusion. However, this is neither a series of happily ever afters nor a permanent end to the threat of vampires. Given the gritty realism of the series, readers are likely to find this more satisfying than a tidy ending.

Joe remains a highly flawed yet sympathetic protagonist. He is still a violent criminal—now the head of a gang of them—but he is also a family man. And, perhaps making him even more sympathetic, he has self-awareness: he knows that he isn’t the next Mortimer Craggs and that he should leave the gangster life altogether. However, he also realises that the remains of the Slaughterhouse Mob and the swaggering thuggery that surround organised crime might be the only chance to overcome both the vampires and whoever is trying to have him killed.

Emma is similarly both made interesting and challenged by her profession: she is an investigative journalist to the core, meaning that—while she is not the subject of a hit—she will happily set aside safety and honesty in pursuit of answers.

The supporting cast have also been refined by events: the overt vampire threat and the ongoing gang war have left them all somewhat tired; but this tiredness manifests in different ways, either in a slackening of previous drives or in a perverse determination not to let things continue as they are.

Overall, I enjoyed this novel greatly. I recommend the series to readers seeking a vampire thriller that does not hide the horror of creatures that feed on humans but also doesn’t solely rely on it.