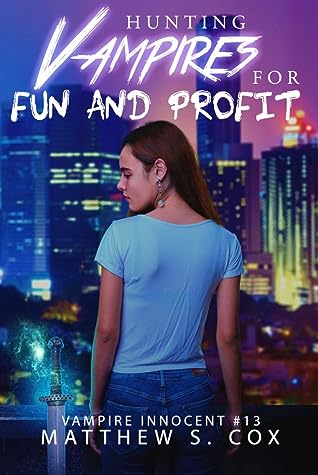 Cox continues his blending of vampire tropes and the concerns of modern US youth to create an engaging tale that has much to appeal both to classic vampire fans and new adult fans.

This novel is the thirteenth volume of Cox’s Vampire Innocent series. Spoilers for previous volumes might cross your path ahead.

The sort of missions that get given to a vampire who can act during the day rather than a mortal retainer are the sort of missions that can become “complicated”. However, working for the tacit vampire ruler of the city grants Sarah Wright a degree of respect in the community that mostly outweighs her decision to remain with her mortal family; so she doesn’t argue when her boss asks her to recover a sword that was stolen from him. Unfortunately, just being around a vampire has left her family plagued by weirdness and undertaking this mission to keep her family safe from organised vampire society means she isn’t there to help when completely unconnected threats turns up.

Following the trend of the previous volumes, members of Sarah’s family have plots of their own rather than just featuring as victims of, or supporting cast for, Sarah’s issues. Thus, the main plot of recovering the sword is interwoven with Sophia balancing the social aspect of going to Guide camp with not only homesickness but an awareness that myths of things lurking in the forest might actually be true, Sierra encountering a magical thief, and Sam getting inexplicably lost in the small patch of trees behind the house.

Cox demonstrates great facility with viewpoint, making those of Sarah’s younger siblings clearly childlike without feeling childish. This provides the reader both with varied perspectives on how his world might function, adding depth without requiring extensive exposition or unfeasible awareness, and more clearly highlights the strengths and weaknesses of other character’s general approaches.

Each of the plots balances existing lore with new complexities, adding nuance to the world rather than retreading old ground or creating a muddle of endless different creatures and powers.

As with the previous volumes, the narrative is gently marinaded in references to classic geek culture and bad puns.

Sarah remains a highly sympathetic protagonist. Having been a vampire for more than a year now, she has moved past the stage of being uncertain what she can do or over being a vampire at all. Instead, she is challenged by how she might best apply her powers and her inate decency. As with previous volumes, Cox presents these decisions as meaningful but not paralysing, making Sarah feel thoughtful but not passive.

Sarah’s siblings similarly balance plausible struggles with a real sense of agency. They each display a distinct character flavoured with realistic internal contradictions but centred around a love of their family that makes them highly sympathetic.

The supporting cast possess a plausible depth, making them feel the protagonists of their own narratives rather than merely tools this narrative.

Overall, I enjoyed this book greatly. I recommend it to readers seeking vampire-centred urban fantasy that prioritises character and plot over flashy powers.

I received a free copy from the author without a request for a review.

3 thoughts on “Hunting Vampires for Fun and Profit by Matthew S. Cox”