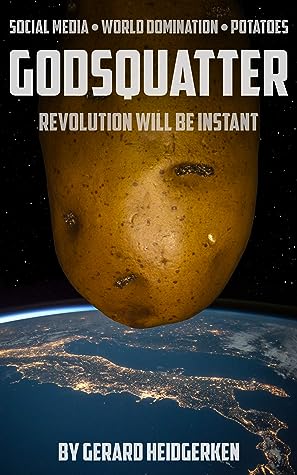 Mashing a bit of Robert Rankin, a chunk of Kevin Smith, and a lot of potato jokes together, Heidgerken produces satire for the generation that can’t even.

Gordon MacNamara works in a fast-food franchise, dreaming not of a better future but of those shifts when he gets to work the fry station rather than something customer facing. His free time is an equally unambitious alternation of rewatching old movies and sucking at video games. So, when he chances across a global conspiracy that uses potato-themed memes to control the world, he doesn’t so much commit to the revolution as lack the drive to avoid it.

From the moment book opens with a prehistoric tribesman fixated on being as famous as the inventor of fire then discovering the baked potato, two things are obvious about this book: it will satirise influencer culture and it will sacrifice plausibility for humour.

Heidgerken creates a world that blends the apathetic subculture of mid-nineties comedies such as Clerks with the superficiality of modern day social media trends. While he handles this with a balance of irony and farce, preventing it from becoming either a string of jokes or a bitter screed, the book definitely focuses more on instances of the absurd than the details of the plot.

However, Heidgerken very definitely does not abandon the idea of plot. Although steps occasionally happen over the course of a paragraph, the plot does follow the arc of a conspiracy thriller. This drives events on and creates a sense of tension that balances the humour.

The conspiracy itself is a skilful merging of stereotypical crazy beliefs and real-world events, simultaneously leveraging the ridiculousness of potatoes controlling the world and appearing no more ridiculous than many of the political conspiracies that fill our media or even inspire violent action. Thus, like all good satire, the book might leave readers wondering if they should be laughing or weeping.

Gordon is an eminently suitable protagonist. He is (echoing fast-food itself) not the embodiment of heroism that the world dreams of but the cheap, nearby, and available at this time saviour that it got. Assuming he even qualifies as a saviour: Heidgerken brilliantly evokes a character without exceptional talents or ambition, a character who doesn’t discover hidden depths in adversity, a character who isn’t useless but isn’t the one who achieves the decisive blows that change events. Thus readers might either find him a pleasing dose of realism among so many books about ordinary young adults who become great heroes, or feel a desire to give him a firm kick so he stops slacking.

The supporting cast do not merely accept that the absurdity of their world is normal, they embrace it. Even the rebels against the massive potato conspiracy still want to be social media personalities and meme producers rather than striving to create a world of substance.

Overall, I enjoyed this book. I recommend it to readers seeking a medium-sized portion of modern life with a tasty seasoning of satire.