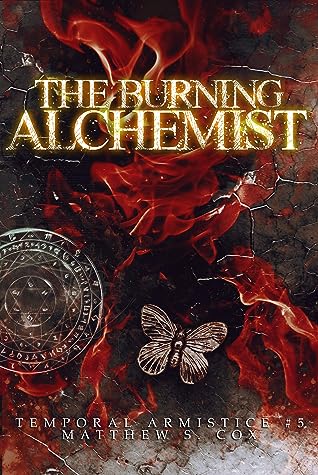 Cox continues his blending of fast-paced thrills, an engaging urban fantasy world, and strong characters, creating another tale of magical firefighting and not destroying the universe.

This is the fifth volume of Cox’s Temporal Armistice series. Ignore the muffled giggling. There definitely aren’t spoilers just waiting to leap out beyond this point.

When Brooklyn Amari rejected her “destiny” to destroy the universe, a militant faction of supernatural beings created a younger copy of her. Brooklyn couldn’t just abandon her six-year-old self, so now she has a sort-of-daughter; a daughter she is torn between indulging and mothering. To complicate her life further, a quick favour for arson investigation uncovers the presence of a cunning and cruel serial arsonist. Single parenting is hard enough without a child who is literally a creature of chaos; how can she handle it while hunting a magical criminal who might have evaded capture for decades?

With the previous volumes having set out the sort of mischief Brooklyn got up to when she was a child, it is obvious from the beginning that raising a copy of herself will not be easy. However, Cox adds two extra difficulties to the mix: unlike Brooklyn at that age, Pandora is aware of her powers; and Brooklyn hasn’t lost her own disdain for stuffy rules. Combined with Cox’s skill at evoking the way children think and act, this results in Brooklyn oscillating between trying to civilise Pandora, joining her in mischief, and realising Pandora’s approach might actually be better.

The arson investigation reveals similar dichotomies: finding the arsonist isn’t Brooklyn’s job, but she can’t let all those people die; hunting the arsonist down and killing them would satisfy her need to make them suffer, but the arson investigator wouldn’t like it. Thus, she commits to do something she doesn’t need to do, and do it the hard but moral way. Her commitment to and skill at this is enough that more than one close acquaintance assumes she will be moving to arson investigation herself rather than just doing repeated one-off favours.

This almost certainly confirms what many readers might have suspected but Brooklyn continues to deny: under the (quite thick) veneer of laziness and poor impulse control, she is actually responsible and decent.

However, this novel is not a character study or conversion narrative: Cox infuses everything from main plot lines to casual moments with characteristic humour and pace, making this equally a fast-paced urban fantasy thriller.

Cox’s handling of the world is equally smooth and nuanced. As in previous volumes, the presence of magic produces plausible absences of technology (including a few humorous moments of alternate history detailing foolish attempts to create such technology) and realistic differences in how society in general and emergency services in particular function stemming from them.

Brooklyn remains an engaging protagonist. Her growing understanding of her powers provide her with new ways to solve challenges but also provide new puzzles to solve, while her ties to others provide both emotional support and create emotional vulnerablity.

Expanding on her appearance in the previous volume, Pandora is a skilled balance of Brooklyn and her own person, presenting as a fully nuanced individual who has diverged from the same start point as Brooklyn rather than a simplistic clone or alternate-reality Brooklyn. This both provides a prankishness to balance Brooklyn’s responsible side and shows that this side might not be solely due to Brooklyn’s upbringing.

The supporting cast, both returning and new, display complexity suitable to their importance in the story, creating both the sense of the story existing in a real world rather than against a backdrop, and showing that questions of decency and responsibility aren’t binary things.

Overall, I enjoyed this novel greatly. I recommend it to readers seeking a fresh perspective on urban fantasy driven by engaging characters.