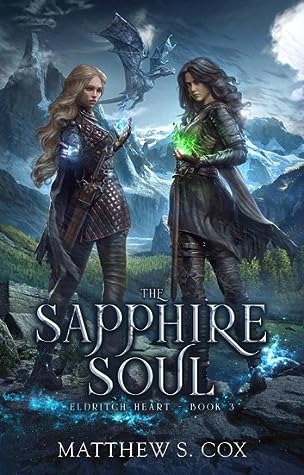 Cox blends the issues that arise after the hero has saved the kingdom with the additional complexities of non-standard relationships and an engaging world of his own making.

This novel is the third volume in the Eldritch Heart series. As Cox himself said at the start of the previous book, sharp pointy spoilers ahead.

Having not only ended a war but managed to forge a peace that benefits almost all, Queen Kitlyn and Oona currently have the support through Lucerna and the surrounding countries. However, gratitude fades, especially when villages are attacked, allegedly by mythical creatures. And, to make matters harder, a deadly curse hangs over Kitlyn. Solving the problems of the nation is clearly the moral act, but Kitlyn dying young risks throwing the nation into civil war.

As with the previous volume, Cox addresses that issue so often left for the reader to imagine after the protagonist’s victory: the “ever after”. Kitlyn and Oona have saved the kingdom, got each other, and ascended to the throne, so are happy. But they are also burdened with the knowledge that ruling a kingdom at peace is more about balancing competing interests than riding around dramatically righting wrongs. This issue is exacerbated by their belief that the balance established by preceding monarchs—Kitlyn’s father especially—unfairly favours the nobility, the group best placed to launch a coup if not treated well.

This political conundrum is further complicated by their society having a long-standing prejudice against homosexuality that has only been mitigated rather than removed by the direct intervention of the gods. While Cox does not soft pedal the actual prejudice or the concern the characters feel that the prejudice might cause issues, he focuses on the same issue of longer-term ruling that underpins the rest of the political threads. Without an heir, any improvements Kitlyn and Oona achieve might well be lost to a war of succession; but a society that abhorred homosexuality has no precedents or even asides for how a lesbian couple might have a legitimate heir.

Although this novel is grounded in these deeper questions of being a good ruler, Cox does not skimp on action. Gods and spirits call upon the protagonists to undertake quests, children are kidnapped from the palace, peasants stagger into audiences having narrowly escaped packs of monsters. As with previous books, Kitlyn and Oona end up setting off to solve problems themselves; but now with the added complexity and doubt of there being sound reasons why the monarch doesn’t race off to handle everything personally.

In parallel with expanding the political situation, Cox reveals more of his world: the alleged appearance of mythical creatures and subsequent investigation is a wonderful vehicle for introducing both folklore and actual strangeness; and researching the curse on the throne is intimate and immediate but also opens up broader vistas of the nation’s history, insights that feed back into the questions of what it means to be a good ruler.

As with all Cox books, there is a thread of humour that leavens and enhances the seriousness by contrast. Here it is a mix of the playfulness of a couple in love and the opportunities for misidentification offered by queens who are still teenagers and are not behaving like monarchs.

Kitlyn and Oona remain sympathetic protagonists. Their love for each other provides each with strength and support that allows them to excel, but also provides another reason to be risk adverse or race off on their own. Infused with decency, they each are happy to risk or slight themselves for the good of others; a trait that bites twice as hard when faced with balancing the selfishness of investigating the curse against possible damage to the nation from Kitlyn dying young and without heir. These tensions, combined with their inexperience at ruling, create protagonists who are neither irritatingly passive or utterly lacking in sense.

The supporting cast also display a level of internal tensions and complex personalities matching their place in the narrative. This creates a sense of a vibrant world where people not only have different stances on issues, but their reasons for those stances mean it is not a simple question of right vs wrong or finding one solution.

Overall, I enjoyed this book greatly. I recommend it to readers seeking fantasy that features complex characters in a nuanced world.