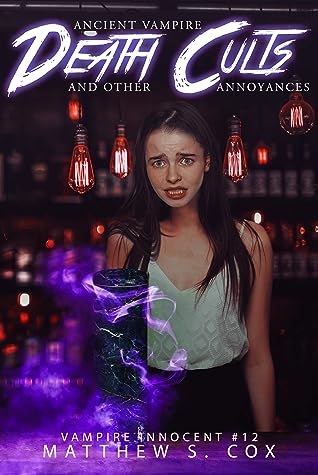 Cox blends contrasting possibilities on the creation of vampires with action and suspense to create a tale of vampiric maturation that has both depth and pace.

This novel is the twelfth volume of Cox’s Vampire Innocent series. Your mind would retreat to the comfort of a dark age at the spoilers beyond this point… so read on, prey.

After a year as a vampire, Sarah Wright is comfortable with her unlife. So comfortable that she’s done what nearly every college student does: get a summer job. However—unlike most students—hers is running errands for the ancient vampire-come-mob-boss who would be ruler of the city if the city accepted it had a ruler. Between that and burning out a nest of hostile vampires, she’s no longer seen as an amusement or a target, and the work mostly isn’t that taxing. Until a simple check-in with some new arrivals becomes a running battle through the streets.

After several volumes expanding on the vampires and vampiric society he presented at the start of the series, Cox introduces an entirely new form of vampires with an entirely new social structure: vampires who claim never to have been human, believe that humans should be reduced to scared peasants hiding in primitive huts from roving vampire predators, and demonstrate powers that support the first claim.

As with previous books, Cox presents this both as a trigger for metaphysical pondering on the nature of vampirism and its moral issues, and as a challenge requiring a mix of cunning and fast-paced action to address. Perhaps most engagingly for readers who love Cox’s blended approach is that these new vampires are not nihilistic thugs: while they don’t agree with human civilisation, their ideology doesn’t require they destroy it—and every vampire who exists alongside it—on sight; thus, they are fully prepared to talk and then walk away if that serves, shifting them from moustache-twirling bad guy toward the rather more complex intellectually honest predator.

In parallel with the arrival of a major faction, Sarah discovers someone might be creating new vampires without regard for discretion or safety. As well as adding an extra level of complication to her life, this allows Cox to both delve deeper into how vampires are created in his world and to show how much of a vampiric “adult” Sarah has become in only a year by contrast.

Following the trend of the last several books, this novel also contains plot threads that follow the (not so) Littles. Although these are smoothly woven through Sarah’s issues, they are strongly driven by her younger siblings rather than merely instigated by them; thus, Sophia, Sierra, and Sam have definitely completed their transition from supporting cast to protagonist. Whilst these are primarily fast-paced parallel adventures in themselves and are almost necessary to avoid Sarah’s family being reduced to inciting incident or convenient mystical resource, they also strengthen the underlying sense of distance between this Sarah and the first book: although she is not conscious of it, readers are likely to be very aware that if her siblings can solve magical threats without involving her then they might eventually not need the protection of them that she still shapes her life around.

Filled with thoughts on the creation of vampires, evidence that growing up has happened without being noticed, and other intimations of adulthood and parenting, it is no surprise that Cox has Sarah return to the issue of her relationship with Hunter: no longer in the frame of pop culture or the knee-jerk reaction of a teenager coping with a situation into which they were forced, but with the mature uncertainty of an adult facing the question of what a future together might be and cost. Although this ongoing thread remains unresolved, its emotional impact might be all the stronger for no longer being flavoured with the certainties of adolescence.

As with previous volumes, Cox infuses the story with a mix of geeky jokes and a wry perspective on the intersection between young, female, and vampire. This both avoids the darker side of the narrative becoming draining and provides entertainment in itself.

Sarah remains a highly sympathetic character. Cox is almost certainly not a twenty-first century female vampire, but readers are likely to feel both that his understanding of them is uncanny for someone who isn’t and that this is how they would want them to be if they were real. In line with the theme of actual adulthood, she remains socially responsible but has a more mature understanding of the difference between following rules and doing what is right, and of how much more complex decisions can be when you’re an adult.

Sarah’s siblings are both strongly realistic pre-teens and plausible possessors of supernatural tweaks; while their perspective is probably further from that of many readers than Sarah’s is, their actions have a clear sense and morality that can be lacking in portrayals of children within adult books. Thus, while they might not act as the reader would, they are not frustrating.

The supporting cast are similarly nuanced, possessing a sense of having their own drives and limitations that both makes them seem real people and provides a series of contrasting perspectives on the challenges and solutions of Sarah and her siblings.

Overall, I enjoyed this novel immensely. I recommend it to readers seeking urban fantasy that captures the emotional intensity of vampirism and other supernatural matters without becoming overwhelmed by grittiness or angst.

I received a free copy from the author without request for a review.