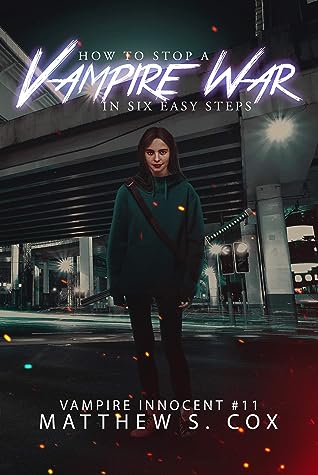 Cox mixes the politely lethal conflict of medieval nobles or mafia dons with the unique threats and approaches of vampirism to create urban fantasy with pace and complexity.

This novel is the eleventh volume of Cox’s Vampire Innocent series. The previous books have plenty of enjoyable misunderstandings and reveals… it would be a shame if someone were to spoil them for you.

After nearly a year as a vampire, Sarah Wright is a—mostly—accepted member of vampire society. Being a glorified messenger for the unspoken ruler of the city can occasionally conflict with lectures and social engagements, but it also gives her a second level of protection to add to Auralie’s decree—until it doesn’t. An attempt on her unlife and the reappearance of an old enemy make leave Sarah caught between admitting she (and her mortal family) is fair game or risking a war between elders.

Continuing the skilled fusing of vampire tales with the milestones of transition from teenager to adult, this novel centres around that nigh ubiquitous new adult experience: the entry level position. In this case, it is working for a powerful vampire rather than a mundane business, but—realistically—it is the same sort of drudgery that most young people entering the job market face.

However, while carrying invitations and other innocuous messages like a nocturnal postal worker is grunt work, disputes in vampire society are—literally—more cut-throat than any between mortal businesses; thus, even before matters escalate, Cox weaves through the same passive tension that employees of legitimate fronts for organised crime might feel.

Once matters do escalate, the comparison with organised crime families—or fractious nobility—becomes much more obvious. With vampires being highly resilient, anything short of massive trauma is unlikely to be a deterrent; which makes any response to an affront only one step away from a classic ‘they put one of ours in the hospital, we put one of theirs in the morgue’ escalation. This is further complicated by both Sarah discovering evidence that suggests more than one person might be responsible, and other vampires suffering attacks as well: if an elder doesn’t react, they seem weak; if they react against the wrong person, it fuels the strife.

Cox carefully feeds the reader conflicting implications and theories, building a pleasing level of paranoid without allowing the plot to succumb to analysis paralysis. This sense of imminent but unclear lethal threat escalates further when Sarah’s family and friends are also targetted.

In parallel with his evocation of new adulthood and discreet yet violent strife between factions, Cox takes the reader deeper into his fresh yet consistent urban-fantasy world. The addition of mind-reading, memory altering, and other mystical powers add new challenges and solutions to the subtle knives of classic noble/criminal struggles, but also provide other unrelated philosophical issues.

Sarah remains a sympathetic character. While she has been aware that vampires are dangerous for the last ten books, having to decide whether to invoke Auralie’s protection potentially marks her transition from knowing they are dangerous and actually feeling that her exquisitely dressed mother-figure is an ancient predator capable of immense brutality. At the same time, she realises that being part of vampire society requires choosing a side in a struggle between creatures experienced enough to fake attacks against their allies to justify responding, who might discard her if she refuses to act like a vampire rather than a human. As before, Cox skilfully balances her drive to protect her family with her desire to remain a good person, creating an engaging struggle over which compromises are excusable.

The supporting cast, mostly returning characters, similarly have complex and nuanced personalities and challenges. This produces an intensity and depth that makes each character to fill space, allowing for a plausibly low number of supernatural beings while maintaining the volume of paranormal action that many urban fantasy readers crave.

Overall, I enjoyed this novel greatly. I recommend it to readers seeking vampiric politics that are highly plausible without feeling mundane.