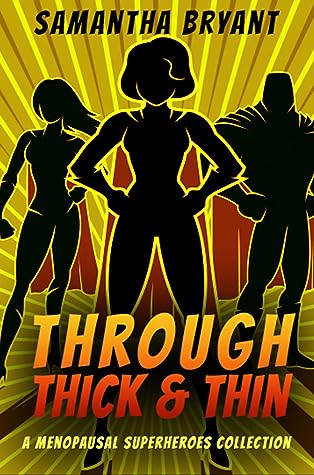 Bryant blends the cinematic display of classic superhero fiction with the emotional nuances of real life to create fast-paced action that focuses on women and minorities but will not appeal only to them.

This collection contains four short stories set in The Menopausal Superheroes universe, revealing details of events not shown in the novels. As such, there are spoilers ahead.

Although each story is filled with its own perspectives, perhaps the defining quality of the collection is that Bryant’s characters are not normal. Not in the trite sense of superheroes being, by definition not normal people, but in the deeper sense that they are not a polished aspirational image of pure virtue or a troubled figure struggling with a overweening issue but unique variations on the complexity of humanity. Where they are not straight, not white, not male, it shapes them but it does not define them.

I enjoyed this collection greatly. I recommend it to readers seeking superhero action that focuses on real people without foregoing fantastical action.