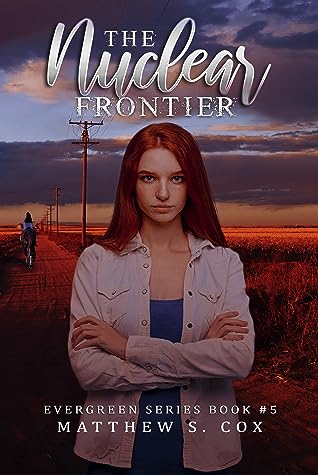 Cox blends fragments of modern US life with universal human reactions to create a post-apocalyptic world that provides both action and emotional depth.

This novel is the fifth in the Evergreen series. Risk of spoiler contamination beyond this point.

A day where the electricity works in Evergreen is starting to become a day of celebration and modern supplies are running out; but Harper has come to terms with the world that was being gone. Until two strangers arrive with news of other settlements and a plan to reunite the lost. Accepting friends and family are gone was hard, but she knows it will be much worse to allow hope back in then find no sign of them.

Cox continues his theme of the post-apocalyptic USA regressing into the American Frontier (rather than becoming a wasteland filled with spike-clad cannibal gangs and lone road warriors) with the reappearance of a Pony Express. While he, plausibly, casts this renewed connection with the world beyond Evergreen as inspiring hope, he also skilfully captures how people used to instant communication and photographs might react to the news someone of the right age with the same first name as a missing loved one is living in another settlement.

In parallel with this new source of both optimism and stress, the long-term effects of Twenty-First Century manufacturing and infrastructure having been lost start to hit: losing someone to raider attack is terrible, but quick; seeing people facing a lingering death for conditions that were almost effortless to manage even a year ago is a whole other horror; and after about a year without a government appearing to restore everything, those who had been coping with the hardship by thinking of it as temporary must accept they will never get their comfortable life back.

For all that society has tumbled to the brink of the pre-industrial, with all the issues that brings (and the additional ones of unmaintained nuclear reactors and such), this is a book about hope: both the motivation it can provide and the danger it can lead one to. However, unlike many post-apocalyptic novels with youthful protagonists, Cox does not focus only on the emotional struggle of a single teenager; instead, he has many of his characters display nuanced blends of hope, denial, and active resistance to various situations. Combined with a lack of dramatic irony, this creates plots where both sides appear to have a point and the reader cannot be sure which will turn out to be the right stance.

As with Cox’s other books, he weaves a line of humour through the drama, both allowing a respite from the seriousness and enhancing it by contrast. In this novel, the humour centres, appropriately, around Harper’s loving mockery of classic post-apocalyptic action films such as Mad Max.

Harper remains a highly sympathetic protagonist. Her prior experiences having honed an underlying good sense and strength of character, she is neither arrogant nor angst-ridden in the face of adversity. However, while she might have grown into a competent adult, both she and others don’t yet always see her that way, maintaining the young-/new-adult feel from the previous volumes.

The supporting cast, as with the previous books, display similarly complex reactions to the current situation. The new areas opened up by the Pony Express expand this palette of plausible stances with glimpses of how other groups have organised their settlements.

Overall, I enjoyed this novel greatly. I recommend it to readers seeking post-apocalyptic action that remains grounded in the likely without losing the dramatic.

2 thoughts on “The Nuclear Frontier by Matthew S. Cox”