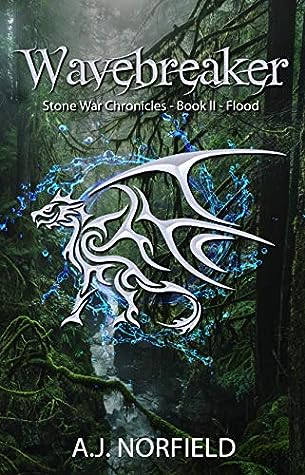 Norfield builds on the plots established in the first half of Wavebreaker, providing new perspectives and conflicts without contradicting the established world.

This novel is the third in the Stone Wars series. Possible spoilers ahead.

Trista and Dalkeira are, officially at least, welcome within the Minai; however, the acceptance of outsiders strains relationships that already defy tradition, leading Shiri and others to nudge events towards Trista’s failure—or even exile. After weeks of battling both foes and politics, Raylan finally has his opportunity to warn the king of the oncoming threat; unfortunately, the king considers the oncoming army easily defeated, imprisons Xi’Lao as a traitor, and chains up Galirras so he might be used as a weapon, leaving Raylan torn between betraying his liege and betraying his friends. Meanwhile, High General Setra strives to fulfil the Stone King’s ambitious commands for new conquests while covertly continuing his attempts to take Galirras for himself.

As one might expect of the second half of a two-volume novel, this book picks up immediately after Trickle, following the same three major plotlines; however, while these do remain mostly separate narratives, the events in one have a stronger influence on others than in the previous book and there are a few direct intersections.

With Trista and Dalkeira having been introduced in the previous volume, the weighting of the narratives is less unequal than in Trickle. However, Trista’s story remains the primary thread of the novel, giving the feel of the second half of a two-volume novel rather than a third book in a series. As the overall effect is to provide more of Trista and Dalkeira while also providing more of Raylan and Galirras, readers who did not hate Trista’s plot are unlikely to find this a flaw.

Each of the three plotlines is well-paced and plausible, providing a good balance of action and insight into the world that is likely to appeal to fans of epic fantasy.

Norfield’s portrayal of Minai life balances the classic fantasy trope of matriarchal hunter society with nuances that—while they might not all stand up to detailed examination by someone seeking to unpick them—hold together well even before accounting for the way in which, for example, immense magic might make tales of all men being “cursed” more than superstition. It is Norfield’s pitching of the situation at “might” rather than “do” that makes the plot particularly engaging: without having proof of whether or not a tradition is valid, the struggle Trista and those raised within the tribe have over the right path and responsibility is the same as that of the real world.

Raylan’s segments continue to follow the classic epic fantasy arc of rag-tag squad caught up in feudal politics, again with specific nuances that prevent it feeling like merely a string of tropes; and again with the uncertainty over whether personal opinions should always trump established structures.

Conversely, Setra’s segments are a vision of a society ruled entirely by personal strength and whim, with all the unfairness and brutality one might expect. Although it is not gratuitous or titillating, Norfield does not hide the cruelty off-page; thus these segments forms a powerful contrast to the more polite arguing over appropriate behaviour in the others.

As with Trickle, Norfield brings each of the major arcs to a reasonable point to pause, but does not conclude them. Thus, this book ends with a strong sense of being the middle of a larger story.

The characters remain plausible and engaging, displaying a greater insight into the history behind their current personalities and actions. This adds sympathy and complexity in most cases, especially with regard to Shiri’s conflict with Trista; however, depending on a reader’s stance on villains with tragic backstories, Setra’s childhood and its consequences might feel like either the key to understanding or an unnecessary abandonment of the classic fantasy binary.

Overall, I enjoyed this novel. I recommend it to readers seeking fantasy that offers the familiarity of classic tropes without being straitjacketed by them.

I received a free advance copy in exchange for a fair review.