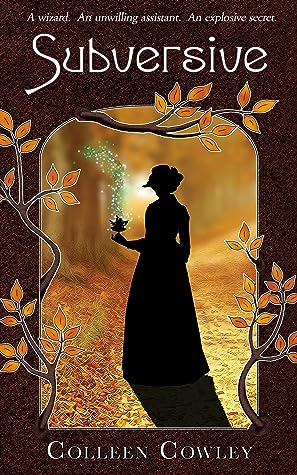 Combining the struggle for equal rights with paranormal romance, Cowley crafts a tale that will appeal to fans of urban fantasy and romance alike.

Wizards rule the United States of America and only men can cast magic. Beatrix Harper spends her days working as a shop assistant to pay for her younger sister’s education and her evenings supporting the Women’s League for the Prohibition of Magic. Until Peter Blackwell, the only wizard the town has produced, causes her to lose her job and all but forces her to work for him within minutes of his return. Despite his initial high-handedness and him representing everything she stands against, she starts to see a good side. But has a leading light in magical research really moved to a backwater town for a change of pace or does he have a more dangerous motive, perhaps the destruction of the League?

At it’s most basic Cowley’s plot is classic romance: when circumstances put two people from opposing groups in close proximity they realise they might like each other; a woman starts to see the good in two men of different character, each of whom claims the other is only pretending to be decent.

However, Cowley’s world both amplifies the aspects that define romance and counters some of the aspects that can frustrate some readers: in addition to the mundane miscommunications and misinterpretations that get in the way of love, magic adds the possibility of things truly not being what they seem and even a protagonist’s feelings not being real. Thus, readers who enjoy the dramatic irony of watching two people fail to realise they love each other are provided with plenty to enjoy while those who have a lower tolerance for people not just talking to each other are presented with plausible reasons why these characters don’t.

This enhancement of the normal also features in Cowley’s wider world-building. Set in an America at some point after the development of heavy industry but before the electronics revolution and ruled by male wizards, the society is inherently sexist; however, with only some men able to cast magic, women are effectively third-class citizens. Thus, some of those who support the idea that wizards shouldn’t rule the nation still oppose Beatrix and her sister because they are women. While this does echo intersectionality, Cowley does not lean heavily into the issue, providing a clear indication of the issue without overtly pushing the message.

In addition to extending the caste system, the presence of magic adds tension to the struggle for equal rights. While real-world history contains more than enough examples of dirty tricks used by unethical governments against those they consider a threat to their power, a government with the power to alter reality can access a whole new level of convenient “accidents” and gaslighting. Again, Cowley features this possibility without deviating from this fundamentally being a romance.

Where Cowley does definitely steer away from classic romance is in the ending. While this book does feature a complete arc, it is definitely also the start of a series; and leaves the happy ever after as something still to be pursued in later books rather than following the more usual romance series pattern of providing an apparent happy ever after that is then challenged at the start of the next book by new events.

Beatrix is a highly empathetic protagonist. Her combination of strong morals, belief in equality, and genuine desire to protect her sister create a dynamic tension where each of the options is commendable. This both allows for her to make decisions the reader would not have made without seeming foolish and to assert or compromise her principles without seeming naive or fickle.

The two wizards who she might love are skilfully balanced: one has brutally forced her into service and is acting suspiciously, but also seems to genuinely care for the well-being of the town and seems to support more equal rights; the other treats her well and offers to give her much she has been denied, but works for a secret unit within the government dedicated to maintaining the status quo.

The supporting cast are pleasingly nuanced, with members of each of the relevant groups having varied opinions and drives; thus, as with the real world, there are women who work to sustain sexual inequality and people who support rule by a group to which they do not belong.

Overall, I enjoyed this novel greatly. I recommend it to fantasy fans who don’t loath any hint of romance and romance fans who don’t disdain a whiff of the plausible impossible.

I received a free copy through a community for authors with a requesting fair reviews.