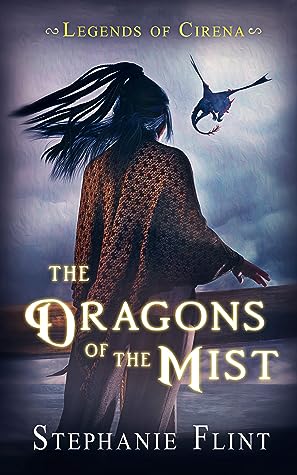 Flint blends ancient dragons with romance and a little comedy to produce a tale that will appeal equally to both those looking for more of Cirena and those seeking something different from the norm without losing the essentials of fantasy.

The novella is the sixth in Flint’s Legends of Cirena series. However, the story neither relies on events in any of the previous volumes or in other books set in the same universe, nor set them in motion so can be read before or at any point after Flint’s other books.

In a world filled with ancient beings, direct intervention by a god—even a recently ascended one—can become complex. So, when a traveller disappears immediately after praying to the god of land travel, he sends Zynia, one of his few priests, to investigate. Unfortunately, she discovers the traveller has passed through a portal to the realm of dragons, and that there is now a dragon guarding it. After seeming to accept her claim that this isn’t a trick by her god, the dragon agrees to let her enter; but she swiftly discovers being allowed to leave—with or without the missing traveller—might be a different matter.

One of the human nations of Cirena bears slight signs of having descended from dragons (her dragons are capable of able to shapeshift into a humanoid form, making this less unfeasible than it might first sound). However, dragons themselves are just a legend to Zynia until she meets one. Flint makes good use of the potential for distrust and cultural confusion this offers without overdoing it: Zynia’s vague knowledge is not enough to either assuage her fears or make negotiation easier, but it does provide some assistance rather than being merely a cause of accidental insults.

To make matters more complex, the draconic race claim to be older than the human’s creator god and tell a very different—and less virtuous—story of how that god created the world as humans know it. Thus Zynia is caught between suggesting her god is too new to be responsible for the pantheon’s actions, and thus is also by implication powerless to rescue her or the traveller she seeks, or doing the proper priestly thing of maintaining her deity’s image, and thus weakening her argument that he is still very human rather than a willing part of divine schemes.

While the trope of a human nation proudly claiming descent from dragons is common in fantasy, this novella approaches this from the other side: the questions of why dragons might seek to interbreed with humans, and whether it is seen as a good thing by the race. Again, unlike some fantasy worlds, she does not treat this latter as a simple binary: much like the real world, there are factions with different views on races interbreeding. While this is a minor part of the story rather than placed front-and-centre, it is still a solid display of diversity over the homogenous blocks that fantasy races often are.

Flint balances these threads well, avoiding the simple answers of good and evil without descending entirely into relativism. Unfortunately, although the treatment cannot be termed superficial, there is not space in a novella for multiple nuanced perspectives on ancient metaphysical truths, the teasing out of true motives from behind facade, a proper exploration of how one might tell when someone is being threatened into claiming they are acting of their own free will, the morality of saving a race at the cost of an individual, and the complexities of interspecies courtships. Thus, the result is closer to a comedy of manners than a tense fantasy thriller.

A situation Flint not only accepts but embraces: unlike some of the other Legends of Cirena series, this novella is light—perhaps even verging on witty situational comedy.

Zynia is a sympathetic protagonist, staunch in her faith but not fanatic enough she believes her deity is unquestionably powerful and pure. This produces a pleasingly different character than the reskinned Catholic priest or Druid common in fantasy. Lacking immense force and moral certainty by proxy, Zynia’s vocation provides both abilities and challenges to add to the wider situation of humans transported to a realm of dragons.

The supporting cast are complex, displaying clear differences in perspective and ability from Zynia (and humans) that they feel like another race without being so loaded with draconic traits that they are emotionally inaccessible or comical.

Overall, I enjoyed this novella. I recommend it to readers seeking fantasy that isn’t focused on mighty heroes or master thieves.