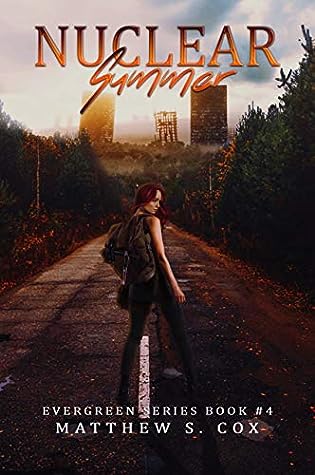 Cox continues his plausible portrayal of a possible post-apocalyptic society with the longer-term dilemmas and challenges that come once a settlement has survived the initial struggle to form.

This novel is the fourth in the Evergreen series. Risk of spoiler contamination beyond this point.

Nearly a year after nuclear war shattered the United States, Harper Cody feels settled in Evergreen. However, without the infrastructure and skilled people to make modern amenities and with supplies running out, the town must choose between scavenging more risky areas or foregoing modern medicine and many other things they took for granted. Harper sees the sense in Evergreen’s choices—even if the possibilities do worry her sometimes—but not everyone does; and—unless she leaves the militia—that make it her problem.

Cox takes the classic Western tale of settlers cut off from civilisation and amplifies the stressors: instead of having to hold out until help arrives, there’s almost no hope of help existing; instead of people who expected hardship needing to work harder to build a stable life, a random collection of people who have experienced Twenty-First century Western benefits watch them slip away with no way to stop it.

Similarly, in addition to the physical danger of bandit attacks, Cox adds radiation: an equally lethal risk, but one that cannot be seen or heard coming, and cannot be driven off by a staunch resistance.

Cox skilfully balances the impacts and implications of these threads. The presence of modern amenities, such as a chlorinated swimming pool, allows for stronger moments of joy to offset the greater risks of the outside world; but the knowledge that they will mostly be lost adds a greater poignancy to those scenes. The external pressure of criminal gangs and the need to become self-sufficient intensifies the drive to work together; but does not overcome the sense of grievance when limited resources require hard choices or people used to having status or post-industrial employability discover they need to perform manual labour.

This greater focus on the long-term physical and social structure of Evergreen does not come at the cost of the exploration and action that marked that marked the beginning of the series. There are still expeditions into unknown territory, albeit with the knowledge now that there is a safe place to head for if the danger becomes too high. However, Cox makes this knowledge a double-edged sword: without the necessity of seeking out a safe place, when is acceptable to risk oneself by heading out or acceptable to risk leading danger back to that safe place?

Harper remains a highly sympathetic protagonist. Being—even more so due to the pressure of the apocalypse—properly an adult now, she has new issues. She is not just a member of the militia but one who has proven herself competent; and thus is given new responsibilities, including authority over others who she sees as older and more experienced. In addition to the social impact, her transition into adulthood raises personal concerns: without access to fully equipped modern hospitals, pregnancy becomes a much greater risk; which—with contraception options reducing—leaves the part of her that is thinking about a long-term relationship with Logan at war with the part of her that wants to avoid risk.

The supporting cast offer a pleasing variety of personalities and drives. Mixing whether they possess useful skills for this new society with different attitudes on personal vs. group benefit, and nuanced personal goals, Cox creates characters who are in conflict without being stereotypical and antagonistic without being irritating.

Overall, I enjoyed this novel greatly. I recommend it to readers seeking plausible post-apocalyptic fiction that contains plenty of action in addition to the introspection.