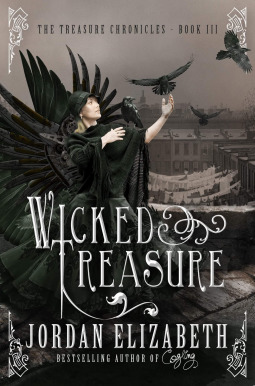 Elizabeth blends elements of political thriller and frontier action with the mystical end of steampunk to create a tale that has both style and substance.

This is the third volume of The Treasure Chronicles series. Spoilers for previous books might leap out, rise up, or otherwise manifest after this point.

With the army no longer chasing them, Clark and Amethyst are enjoying married life—until their new daughter is kidnapped. The trail leads to a familiar name but also to a wider political conspiracy. Meanwhile, unknown to them, an inmate at an asylum prophecies that it is Clark who will bring down the presidency.

Where the previous two books were quite narrowly focused on Clark escaping the military and defeating Senator Horan, this one expands the plot to include the possibility of prophecy and the ongoing tension from the nation having gone from monarchy to republic less than a generation ago.

This new and distinct set of issues rather than a resurgence of the military’s interest in using him avoids undermining the victory of the previous books and provides readers with new characters and fresh insights into the world.

However, especially given the previous books were a single story split between volumes, the shift does also make this novel feel separated from the previous narrative: the extent of this, and whether it detracts from the experience, are likely to vary depending on which aspects of the series a reader most enjoyed.

Elizabeth skilfully adds new snippets of evidence to the conspiracy, neither frustrating the reader with repeated twists nor making it obvious enough that the characters’ failure to uncover the truth makes them seem wilfully obtuse.

In parallel, she weaves the tale of a girl potentially with prophetic powers imprisoned by a mysterious group within the government. Unlike the nuances of the conspiracy, Elizabeth does not provide the exact nature of the girl’s powers or details of the mechanism behind her having them. While this does avoid making the mystical feel mundane or reliable, adding to the tension, it also informs the reader that more than one sort of magic is possible while not providing the limits, weakening the reader’s ability to predict whether a situation is serious or not.

Unlike many series where lead characters fell in love and struggled to be together, this novel does not feature a subplot in which the couple are driven apart by misunderstanding; instead, Elizabeth embraces the idea of Clark and Amethyst being a happily married young couple, leading to behaviour that some characters—and potentially some readers—find inappropriate for public consumption.

Clark and Amethyst remain sympathetic protagonists, consistent with their previous appearances but shaped by them too. As befits a married couple, they each both draw strength from the other and strive to be worthy of them.

The returning cast are similarly complex and nuanced characters, rooted in but not straitjacketed by their previous appearances. Of particular note is Elizabeth’s recognition that loyalty and morality can each drive someone to support (or oppose) another, so a character might like someone but not agree with them or support them without liking them.

While the introduction of two new major threads does necessitate the adding of a reasonable number of new characters, Elizabeth skilfully creates her scenes to maximise the reader’s exposure to insights into their drives and personalities without denying page-time to the returning characters.

Overall, I enjoyed this novel. I recommend it to readers seeking a conspiracy thriller that is neither set in the modern real world nor a Western medieval fantasy setting.