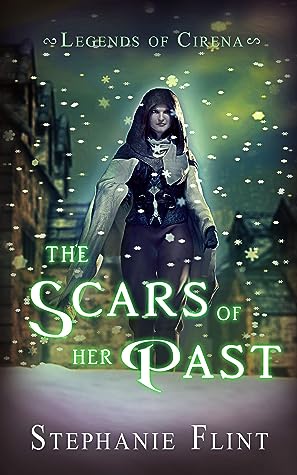 Flint blends the prejudices and drives common to all humans with the specifics of her world to create a tale of magical terrorism that will appeal to fans of both fantasy and thrillers.

Alia left soldiering behind to become a merchant. She’s only a junior partner at the moment, but the forthcoming festival in Sastae might earn her enough to set up on her own. So, when a goddess warns her of a threat to the city, Alia informs the guard and returns to her stall. However, an encounter with a man who might be both one of the extremists and the man who gave Alia her scars, leaves her torn between her new life and the one she chose to leave behind.

While Flint’s universe is highest fantasy, with powerful magics and frequent divine interference, this novella is a thriller at its core: terrorists (or heroes doing what needs to be done) are plotting to cause havoc during a major public event; a former special forces operative (or murderous oppressor) still traumatised by their past feels the call to turn vigilante; a figure seen at night might be a war criminal from years ago. Thus, the plot is primarily one of paranoia interspersed with bursts of covert action rather than magic and swashbuckling.

However, this is not merely a reskinned real-world-terrorism thriller; Flint skilfully shapes the options and challenges to the metaphysics of her world, making this both fantasy and clearly in Cirena rather than another setting. Therefore, readers looking for a story of magic or Cirena specifically will not be disappointed.

Although this depth of embedding does mean that the extremists’ rumoured plan turns on a specific aspect of Flint’s magical system, this detail, and the relevant parts of the wider world, are explained clearly enough through conversations and internal dialogue that readers new to the world are likely to grasp the threat without difficulty.

As with other Cirena books, Flint also includes a glossary at the back that is likely to clarify anything a reader does not infer from the text. This is—as is common in ebooks—difficult to access without losing immersion. However, given the story is more focused on character than nuances of politics or mystical hierarchies, even readers unfamiliar with Cirena are unlikely to need to refer to it extensively or at all.

The potential downside of Flint providing this context and explanation within the story is the increased density of exposition: while conversations and thoughts are triggered by events rather than existing solely to instruct the reader, readers who favour working everything out for themselves might find the balance too far toward telling rather than showing.

Alia is a sympathetic protagonist, neither gung-ho in the face of uncertainty nor paralysed by doubt. Even before the details of her past are revealed, her decisions have a clear sense of coming from the conflict between fundamental decency and inner trauma, ensuring that—although the reader might not always agree with them—they do not seem capricious or immoral.

The supporting cast have a similar complexity, which both adds to the air of uncertainty needed for a thriller, and creates realism and empathy. Even the divine, while revered, is accepted to sometimes use part of the truth to manipulate or to place principles ahead of self-interest.

Overall, I enjoyed this novella. I recommend it to readers seeking a fast-paced fantasy thriller.