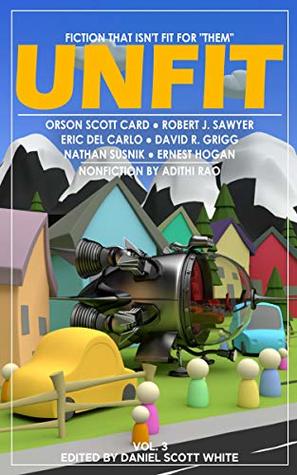 United by the theme of perception vs reality but varying in themes and tone, the contents of this magazine provide engaging perspectives on whether we are defined by our experience of reality.

This magazine contains six short stories themed around technology altering perception, along with a brief essay about film funding.

While each of the stories White has selected is marked by interesting nuances, there is a common feel of social media superficiality to several of them. This similarity is emphasised by his choice of order. Thus, readers are likely to either better note the subtle contrasts or experience a slight “hashtag” fatigue.

In contrast both ‘Lost in the Mail’ and ‘How Rocky Horror Saved the Day’ are in no way augmented reality stories; whether this acts as a palette cleanser or deviation will depend on the strength of each reader’s preference for the edition’s theme.

The ebook edition lacked an embedded table of contents. Thus readers wishing to return to a specific story will need to scroll through the entire publication or guestimate location if their ereader offers a goto page function.

Overall, I enjoyed this magazine. I recommend it to readers seeking perspectives on how augmented or falsified realities might shape our actions.

I purchased my copy of this magazine and was not asked to write this review. However, I have published one of the editor’s short stories.