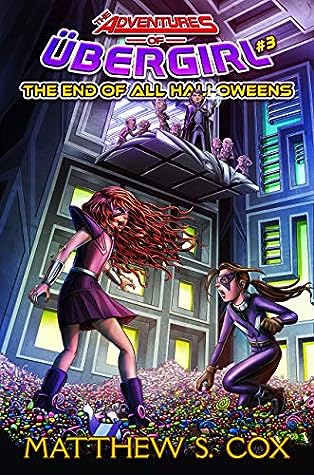 Cox blends the simplicity and passion of middle-grade narratives with the grand scale of superhero fiction, creating another humorous tale that contains much to appeal to readers of all ages.

This is the third book in The Adventures of Übergirl series. This review might be plotting to spoil the previous books.

After saving the world from aliens, Kelly Donovan hoped things might return to normal. Unfortunately, the alien crystals that gave lots of people superpowers can’t be destroyed without destroying Earth too; so, she’s still a middle grade superhero and her parents are still supervillains, leaving her torn between having her parents locked up and letting them get away with things. Worse, all the sweets and chocolate start disappearing just before Halloween, threatening the important ritual of trick-or-treating.

Unlike the alien invasion and supercrime plots of previous volumes which, while pitched at a middle-grade level, would not be out of place in the most adult of superhero narratives, this book centres around a more childlike issue: the disappearance of all the good treats just before Halloween. Continuing his plausible portrayal of the pre-teen mindset, Cox summons up the intense horror this prospect brings while also showing his characters are aware it isn’t as serious as plane crashes and other events. Thus, the novel will appeal to children while not seeming shallow to a more mature reader.

This underlying awareness of significance is enhanced by Kelly’s continuing guilt over allowing her parents to undertake evil schemes and fear of losing them, a conflict as recognisable to any reader whose friends or children have made poor choices as to nine-year-old superheroes with ethically variant parentals.

As with the previous books, Cox skilfully balances gross-out gags, farce, puns, and other types of humour; thus readers who love snot and those who prefer the more intellectual challenge of identifying the real-world product behind the adapted one can happily co-exist—perhaps a little distance apart.

Kelly remains a sympathetic protagonist, intelligent and decent but also inexperienced and not immune to the obsession of childhood.

The supporting cast are similarly nuanced individuals, portrayals consistent with a child’s perspective but displaying complexities that will engage adult readers. This is especially evident in the development of Kelly’s parents due to the same—implied—stress between supervillainy and family.

2 thoughts on “The End of all Halloweens by Matthew S. Cox”