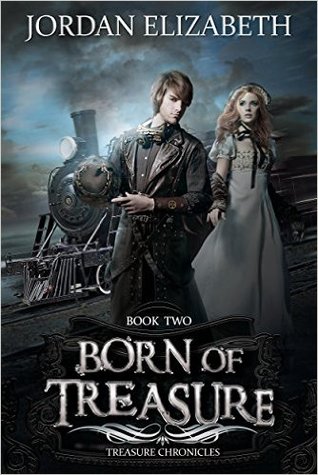 Fusing necromancy and steampunk devices with a classic Western tale of honest ranchers facing corrupt officials, Elizabeth provides a fantasy Western that has much to attract fans of either genre.

Fleeing from the military after mistakenly consuming a chemical that grants the power to raise the dead, Clark Griffin is pretending to be the son of Grant Treasure; an imposture that requires he conceal his marriage to Amethyst Treasure, his supposed sister. Unfortunately, with a cabal of power-hungry men attempting to gather his real father’s inventions to bolster their power, he must choose between protecting himself by hiding and risking capture by doing the decent thing; a choice that, with the army continuing to search for him, might be taken for him.

As Elizabeth states in her author’s note, this novel and the first volume of the series were originally written as a single large book that she later chose to split in two for publication. Thus, while the severing occurred at a natural break point, it has more of a sense and style of continuing a single story than many serial volumes; whether this adds or detracts will depend on each reader’s individual feelings about the primary arcs of the first volume and their preferred balance between reprise and onward progress.

One way in which this sense of a single book split into two is especially obvious is in elevating apparently underused areas of the premise. For example, where mention of Clark’s powers in the first volume raised abilities that did not then feature, this volume returns to those abilities in greater detail. Thus readers who felt certain things were missed are likely to find this volume fills many—if not all—of the gaps.

While this is a continuation, it is not simply an extension. Aided—and pestered—by his father’s ghost, Clark is no longer simply running from the army but has gained the potential goal of gathering his father’s inventions. Similarly, Elizabeth’s addition of a second person who has consumed the potion provides a contrast to Clark’s near rejection of his powers.

Elizabeth plausibly expands the fantasy steam-western world of the first volume, ironically capturing how closely blended with civilisation the Old West actually was better than many straight Westerns.

As might be expected of a novel that is so intimately linked with its predecessor, this one leaves many of the wider plot threads unresolved, giving a very clear sense of being part of a series. However, it conversely provides a more nuanced resolution to those threads it does conclude than the segment arcs of an average serial volume. Thus readers are likely to end this book feeling satisfied rather than abandoned.

Clark continues to be a sympathetic protagonist, both strengthened and impeded by both his common origins and his caution. Amethyst is similarly sympathetic whilst providing a mirror of Clark: utterly at home with riches and immensely confident. These contrasting, equally imperfect, responses to challenges provide a pleasing dynamism to both their romance and the plots as a whole

The returning secondary characters are expanded plausibly, adding complexity without sacrificing realism or accessiblity. In some cases, this suggests that the reader’s judgement of them from the first book might not be utterly justified, mirroring Clark’s growing understanding that things are not as clear cut as he thought they were.

Overall, I enjoyed this novel. I recommend it to readers seeking steampunk that is focused on character rather than engineering or extravagance.