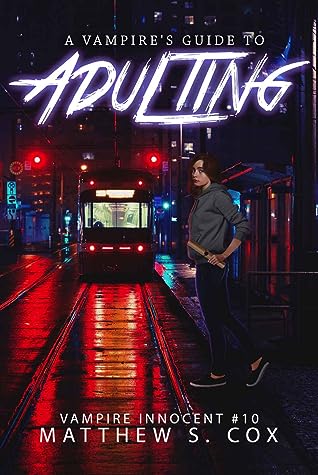 Cox blends fast-paced vampire thrills with the entirely mundane challenges of being the responsible adult, creating a plausible image of what living amongst humans as a vampire could well actually be like.

This novel is the tenth volume of Cox’s Vampire Innocent series. Consider carefully whether you wish to risk spoilers.

After nine months as a vampire, Sarah Wright has her life back on course; she and her family have worked past the weirdness, she’s making college work, and she’s avoiding riling up other vampires enough they’ll risk challenging her mentor’s protection. After all the supernatural problems, she can’t completely shake the feeling the other shoe is going to drop, but she’s confident enough to offer to look after her siblings while her parents take their first adult holiday in nearly two decades. Unfortunately, the problems of parental responsibility aren’t easy to solve with vampire powers, especially when she’s promised not to use mind control on her family.

As with the previous volumes, this novel opens with Sarah delivering a soliloquy on past events while performing her daily routine. However, unlike previous volumes, the challenges she faces remain lower level rather than quickly escalating or being pushed aside by a new serious issue. This comparison between the high drama of her recollections and the chuntering of current events creates a powerful image of a situation in which nothing worldshattering is happening, both underpinning the Sarah’s sense of waiting for something bad to happen and powerfully demonstrating the difference between the intensity of teenage life and the tedium of adulthood.

However, this is still firmly urban fantasy rather than family drama. While these issues are not massive supernatural conflicts and quests, looking after three pre-teen children and other otherwise common tasks are made complex by being trapped in death-like sleep until mid-afternoon and experiencing blindness, great pain, or even smouldering if exposed to sunlight. Thus, perhaps even more than the previous books, this one provides a deep and engaging perspective on how a vampire might retain some semblance of a normal life.

Of course, Cox does not merely hang the book on the trope of vampire childminder; Sarah’s continued success at not letting her family life imperil vampire society has convinced some vampires that it is time for her to become a fully accepted member of it. Thus, in parallel with the exploration of what it might mean for her to be an adult human she is faced with the question of what it might be to be an adult vampire. Readers familiar with balancing a family and a demanding job are likely to experience especial empathy at the inevitable clash, although hopefully without shared experience of literal inhuman horrors.

As before, the novel is salted with slightly geeky humour, irony, and occasional light farce that makes the serious parts more serious by comparison while preventing the grimmer facets from veering into bleakness.

Sarah remains a sympathetic protagonist, neither mired in fear of consequences nor overconfident of her powers but still challenged by the balance of caution and opportunity. As befits the theme of maturation that underpins the novel, her major struggle stems not from balancing her home life with what vampire society demands of her but with the conflict between being being there for her siblings and doing the right thing rather than the acceptable thing as a vampire.

The supporting cast, new and returning, demonstrate the same complexity. While Cox skilfully avoids any sense that this is message-fiction, they do provide contrasting examples of maturity, innocence, responsibility, and selfishness that inform or complicate Sarah’s choices. This is especially noticeable—and amusing—in the case of the plausible and bizarrely logical actions of child characters.

Overall, I enjoyed this novel greatly. I recommend it to readers seeking vampire fiction that focuses on the ethical aspects of supernatural power and limitation without becoming angst-ridden or dreary.

4 thoughts on “A Vampire’s Guide to Adulting by Matthew S. Cox”