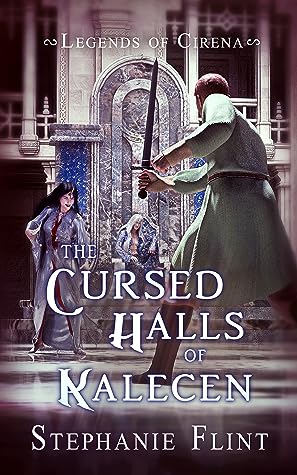 Flint presents magic, cunning, and duelling as different but equal matters, creating a tale that captures how non-mages might hold their own in a world of powerful mages and active gods.

As duelling instructor at the Academy in Memnar, Hahven’s duty is arming his students against the threats they may face. So, when one of them uncovers a plot to harm another of the instructors, he does not hesitate to protect her. Unfortunately, the plotters have called upon Kalecen, a god of justice—but not the equitable justice of humans, a harsher and more alien justice. Hahven is one of the most skilled fighters in the Academy, but how can he save someone from a god?

The novella is the fourth in Flint’s Legends of Cirena series. However, the story neither relies on events in any of the previous volumes or in other books set in the same universe, nor set them in motion so can be read before or at any point after Flint’s other books.

As befits a short story with a duellist as protagonist, there is significant amount of combat, both mundane and with at least one participant using magic. Flint skilfully balances nuances of weapons technique with fast-paced action, making these fight scenes seem gritty and plausible without sacrificing flow and character.

Unfortunately, given the lack of room to explain everything a short provides, details of what magic can commonly achieve are mostly absent. Thus, there is no way for readers to estimate whether a fight where one combatant has magic will be easy or hard, and whether Hahven is in real danger; some readers might therefore find this weakens the tension. Not knowing which magical techniques are common also makes it harder to judge whether Hahven is facing difficulty because he has met a rare ability or because he has failed to anticipate something he should have expected, potentially undermining the sense of how competent he is at his job.

As with many of Flint’s books, this one has a glossary at the back which might go some way toward answering reader’s questions; however, in ebook at least, glossaries are hard to effortlessly flick back and forth between so some readers might find accessing this information as distracting as the lack of it.

Although combat is at the centre of the plot, Hahven does attempt to find non-combat solutions to the situation, adding displays of reasoning and negotiation to the mix. In addition to providing a contrast to the fight scenes, these give an insight into both the context of events and the wider world.

Readers already familiar with Cirena might find both the concept of Kalecen and the sacrifices Hahven might need to make to save his student are darker than other tales; however, they are not jarringly so and remain in the realm of gritty fantasy with hard moral choices rather than approaching character-torture.

Hahven is a sympathetic protagonist, possessed of enough skill and knowledge to plausibly face the threats he does but not enough that they are blips to be casually swept aside. With the reader’s only knowledge of what is possible or true coming from what he knows or discovers, this adds an extra layer of tension to his decisions to do what he thinks is most moral or effective.

The supporting cast are characterful yet not so detailed they overwhelm the story. This is especially noticeable in Kalecen, who is presented as a genuinely inhuman being without being burdened with pages of Hahven’s incomprehension and uncertainty.

Overall, I enjoyed this short story. I recommend it to readers looking for engaging fantasy with consequences.