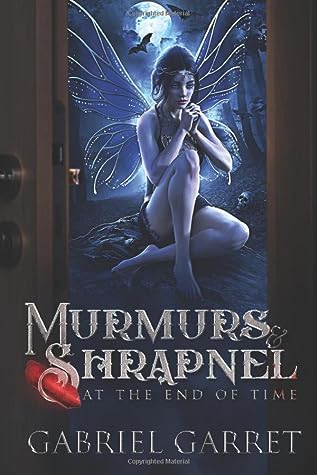 Jack lives a boring life with a boring job, his only escape sketching winged women and monsters. When he starts half-hearing voices, he thinks it’s stress or madness. Until one of the voices becomes so persistent he gives in to its demands. And finds himself face to face with one of the women he drew. A woman who claims he hid her, and myriad other angels, away before the dawn of time and must now release them. With other people able to see her, he realises he isn’t mad; but how can he save the world if he doesn’t remember this supposed past and no-one will answer his questions?

Garret builds this story around two pillars: that angels aren’t exactly the way they’re described in legend and the trope of a hero locking away a secret even from themself.

The first of these produces an interesting blend of aesthetic and metaphysic, as beautiful women with various different types of wing—from birds, bats, and insects—join the cast, each displaying different powers that seem not inconsistent with their wing type enter Jack’s orbit; while more Boschian horrors, again with powers that are neither defined by nor unexpectedly jarring with their appearance form a potential force of oblivion.

Thus, Garret provides a balance of extreme powers and underlying coherence of world that is likely to please readers who like urban fantasy with world-shattering consequences.

However, Jack’s amnesia is likely to be more divisive as none of the characters are forthcoming with details of his past. This lack of knowledge certainly strengthens the air of paranoia around who to trust and the correct course of action. However, while the first instance of someone not believing he actually doesn’t remember or being petty because he has—unwittingly—done something that original him would know was offensive, seems plausible, the constant refusal by any of the angels he rescues to explain properly even once they have realised he doesn’t remember and agreed to help him might begin to grate for many readers.

Fortunately, characters do eventually start to provide some information and some of Jack’s memories do return, so the later parts of the book suffer less from this issue.

When not portraying Jack’s struggle to understand, the plot is filled with fast-paced action with a real sense of consequence.

Despite having good reason for analysis-paralysis or lack of commitment, Jack is proactive and his actions are usually reasonable based on the information he has. Thus, while he is not always as decent as he might be, he is definitely both plausible and sympathetic.

The supporting cast of supernatural beings are a skilled balance of living archetype and nuanced personality. Chronic unhelpfulness aside, they are engaging representations of something that might lead to myths of angels or demons but isn’t actually an emanation of a perfect godhead.

Ironically, the human cast seem less complex and more like concepts. However, they only take a minor role so this does not detract from the realism.

Overall, I enjoyed this novel. I recommend it to readers seeking high-powered urban fantasy who don’t throw a book across the room the first time an ally hides key information from the protagonist.