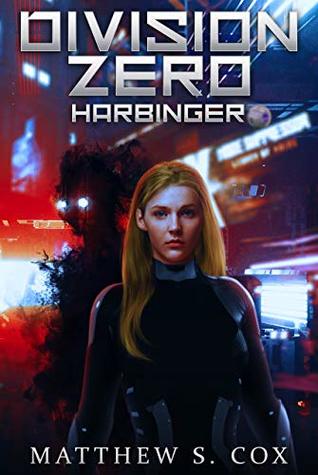 This novel is the fifth in Cox’s Division Zero series. It also refers to events in The Awakened series. High risk of post-cognitive contamination beyond this point.

Lieutenant Kirsten Wren feels like she’s finally in a good place: her adoptive son seems to have left his traumatic past completely behind, she’s in a stable relationship, and no corporations, demons, or other soulless entities have tried to murder her for over a month. However, when an act of kindness leads her to potential evidence of working abyssal magic, and a young woman turns up raped with no memory and signs of possession, Kirsten realises the city might be facing two powerful evils at the same time; a fear strengthened when a Harbinger, a being that exists to drag the most corrupt to hell, starts following her.

While Cox handles the portrayal of sexual violence and its impacts respectfully, neither engaging in graphic details nor allowing the narration to slip into victim blaming, one of the major plots of this book does revolve around rape. Areas of this might might therefore not be comfortable reading for some.

As with the previous books in the series, Cox interweaves cyberpunk police action, psychic horror, and metaphysical speculation; and does it without any one detracting from the others. This is a world where technology both solves and creates the majority of issues, the supernatural rarely provides overt evidence to the mundane majority, and even those who know ghosts are real don’t fully understand the spirit realms; thus, Cox skilfully avoids both the mysterious disappearance of belief in the mystical and the irrelevance of technology that exist at either end of the technology vs magic spectrum.

Rather than risk this balance with either escalation or plateauing of supernatural power, Cox draws on the rarity: while Kristen might be almost certain something magical or ghostly is involved, she doesn’t have the ability to simply know the location of every spiritual being in the city; thus, much of both major plots revolve around seeking trace evidence and looking for patterns.

With areas of the city being dangerous for a single officer, psychic or not, Cox also provides an engaging series of armoured cops vs gangs and criminals skirmishes.

In parallel with Kristen’s psychic police narratives, the book also follows Evan, her son, to a greater extent than before. This provides a second, rather different, set of challenges from being psychic and possible ways to solve them.

Cox leavens the horror of violation with the ironic humour one might expect of police officers and scenes of genuine happiness in Kirsten and Evan’s home life. This both grants the reader respite from the darkness and highlights what is at stake if the threats are not stopped.

Kirsten remains a complex and sympathetic protagonist. Her experiences and victories have granted her more stability but not erased her self-doubts completely, producing a highly plausible image of adulthood.

Evan, as with all of Cox’s child characters, is immature without being simplistic; his reactions make complete sense within his very limited experience of life. As with Kristen, he is no longer trapped by the problems of his early childhood but is not free of their impact on him.

The supporting cast are nuanced, with even nameless thugs who appear in a single scene feeling like more than a stereotypical mook to act as a speed bump or brief moral dilemma for the hero.

Overall, I enjoyed this novel greatly. I recommend it to readers seeking science-fiction that has both dramatic action and emotional complexity.