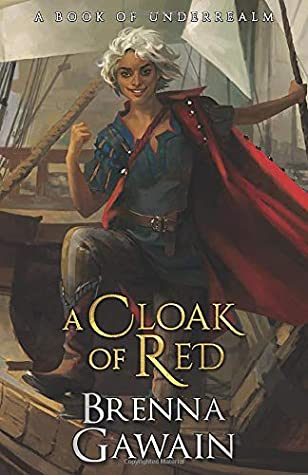 While this novel is the first in Gawain’s The Tenth Kingdom series, it refers to events other series set in Underrealm. There might therefore be spoilers ahead.

In exchange for the funds to attend the Academy for Wizards, Theren contracted to serve her patron once she graduated, an event that—despite numerous self-created delays—has now happened. Unwilling to spend her life merely displayed as a sign of conspicuous wealth, she flees into the backstreets of the capital. Apprehended by Mystics, she is shocked to be offered a job based on her part in the foiling of an evil scheme within the Academy. Serving within the Order will free her from her patron, but how can she work with the very people who tortured her while investigating that same scheme?

While the trope of a renegade, thief, or other individualist being pressured to join the forces of authority is common, Gawain provides plenty of nuance to avoid it feeling stereotypical. Most obviously, instead of the common trigger of having heard of an elite force using excessive force, Theren herself has been tortured by the Mystics for something she didn’t do; thus, her belief that they are not enlightened protectors is not merely political but visceral. To this, Gawain adds points-of-view from Mystics showing they are open to venal acts, and therefore the crimes of the order are not a case of gritty heroes doing what must be done.

This clear imperfection justifies Theren’s paranoia about the motives of the Mystics she encounters. However, Gawain skilfully inserts Mystics who are harsh out of perceived duty or criminals who do serve the good of all, ensuring Theren’s choice of allies is not as simple as it should be.

As with many novels in the world, this one includes romance. In this case, a stable ongoing lesbian relationship rather than the more usual fantasy trope of enemies-to-lovers or other first-flush variants. In addition to avoiding the crushing self-doubt and string of misunderstandings that some fantasy readers find dilute action adventure, this provides Theren with another reason not take a job that might involve rushing across the realm alone for extended periods, yet also makes submitting to her patron even more of an unpleasant option.

Although the story does feature characters from Robinson’s The Academy Journals the plot is not a direct sequel. Therefore, readers do not need to have a good recall of those books—or indeed to have read them all—to enjoy this one. However—while Gawain does smoothly insert précis of critical events and matters—the broader emotional context of certain things featured in previous books is not repeated; thus, readers coming to this without having read certain of the previous Underrealm novels might not feel the same urgency that the characters display.

Gawain prose is entirely suitable for continuing another author’s characters in a previously created world: careful reading can identify differences of style and usage, but the overall effect is similar to Robinson’s; therefore, readers seeking more of the world are unlikely to find this a dull echo or a jarring note.

Theren is an engaging protagonist. Fundamentally decent and intelligent but treated poorly and lacking information, she is neither irritatingly good nor casually contrary. Instead, she attempts to achieve something meaningful using approaches that, even if they are not those the reader might choose, are plausible reactions to events.

The supporting cast are solidly crafted, each displaying a reasonable mix of beliefs and drives that make their actions appear realistic rather than plot-driven.

Overall, I enjoyed his novel. I recommend it to readers seeking fast-paced fantasy that avoids black-and-white morality while not wallowing in anti-heroic subjectivity.

2 thoughts on “A Cloak of Red by Brenna Gawain”